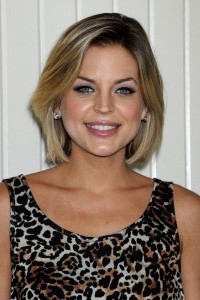 Everyone of the great soapers that regularly visit On-Air On-Soaps, and that have expressed their concern and well wishes over the last several months for General Hospital’s Kirsten Storms (Maxie), finally got a message from the talented young actress via her Twitter account yesterday!

Storms, who has been on medical leave since September, tweeted: “I hope everyone is having a great holiday season w/the ones they love…fingers crossed you’ll see more of me after the New Year!! ;)”

This is somewhat encouraging news! Recently, Jen Lilley who has replaced Storms as the temporary recast of Maxie Jones, told her hometown newspaper at Roanoke.com about her experience while in Storms place, and her contract status with the soap, stating,  “The entire GH cast and crew are such warm, amazing, kind, and talented people. At the same time, I sincerely hope Kirsten gets well and comes back. They can always write me in as a new character, it is a soap after all.  Right now, I’m under contract through Christmas, and if she is still feeling ill, I will do another 90-day contract that ends in March of 2012.”

Sean Kanan OUT at The Young and the Restless!

IT'S OFFICIAL: Lisa Rinna returns to Days of our Lives!

I rather like Jen Lilley… she’s Storms and the late Shell Kepler (Amy Vining) rolled into one! She’s done a fantastic job!

Agreed, she does remind me of the late Shell Kepler’s Amy Vining as well – excellent comparison Rickie. I think Jen Lilley is doing a fine job, but I still look forward to the return of Kirsten Storms.

Kirsten, hope your doing well, and can’t wait for you to come back, we miss you.

Kirsten – I love you a big fan!!! I hope you get well GH is not the same without you!!!

Can’t wait for Kirsten to come back, I do not like Jen as Maxie at all. Maxie is irreplaceable

Everytime I watch I wonder when Kirsten will Return, tried yesterday to find any updates so glad to see she may return soon. Don’t think anyone can fill Kirstens shoes when it comes to Maxie. Get well and look forward to your return.

I hope Kirsten comes back soon. I am not a fan of the new girl!

Kristen, I have been watching GH for over 25 yrs and you are great as Maxie Jones. I hope you get well soon, because no one can fill your shoes. Happy Holidays and can’t wait to see you back…………….

Kristen IS Maxie Jones and she can’t be replaced. I’m having a hard time buying you’re replacement as Maxie, she just does’t work. Come back and give Spinelli a little more attention!

I think Jen is doing a pretty good of job as Maxie Jones, considering she has some major shoes to fill. Still, nobody can play Maxie like Kristen

Not that Jen is not doing a great job , but I can’t wait until Kirten is back !!!! yay ! .. Hopefully Jen can land a new character part in GH 🙂

I absolutely love Kirsten Storms and miss her desperately on GH. There is no one like her and we hope she recovers soon.

God Bless you Kirsten, yes I really miss you, please get well soon and yes Jen Lilly is doing a good job in your place as your spot is kept open is a strong indication is will be waiting for you when you are ready. Stay safe

Jen is doing a good job but she is no Kirsten. It’s seems like it’s been a long time since the real Maxie has been on and I really want to see Kirsten come back soon.

when is Kristin storm coming back I hate the new one, she is not maxie. Kiesten needs to come back. Is she ok??????

shes still sick ,wont be back for while,I think jenn lilley is doing a good job taking over.

She’s not coming back. That new chick was hired on a permanent basis. I personally don’t have a problem with her though I still prefer Storms.