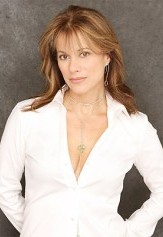 The outspoken and fabulous, Nancy Lee Grahn (Alexis) of General Hospital, has a new storyline launching this week, when it is revealed that Alexis has menopause! So what does the Daytime Emmy award winning actress think about this plight for her alter-ego?  Well, in a new interview out today from TV Guide, she with her wry sense of humor and honesty takes a look at the decision to make Alexis have hot flashes! Plus, Grahn, who has been taken to task by some on twitter, talks about those tweets that landed her in a bit of hot water, but also how important she feels it is for her to a voice on a myriad of subjects when soap actors are all but ignored by the mainstream press!   Here are a few excerpts below!

Nancy on if she feels the soap audience wants to see a menopause story:  “Do they want to see one more mob shootout? In the 15 years I’ve been on GH we haven’t had many stories told about women from a woman’s perspective. I think I can make this funny and entertaining and relatable. Besides, it’s very timely, because the soaps are also going through menopause! Women can either think of this stage of life as death or a chance to transition into something wonderful, and that’s what the soaps need to do. To survive, they need to change with the times. They need to adapt. [Laughs] They need some damn hormones!”

Nancy on if new GH executive producer, Frank Valentini is happy with the menopause decision for a story for La Grahn, when it was originally Jill Farren Phelps idea/concept:  “Frank doesn’t like the idea of Alexis having menopause because he thinks it makes her too old. Now if she turned into some dried-up old hag over this, well, that would be very painful to watch. But there’s no need for that. I had a great love affair in real life, a really amazing romance, after I started menopause, so I know it’s not the end of life as we know it.”

Nancy on accidently spilling the GH spoiler that Sam is pregnant via Twitter, and if she gotten into hot water because of it: [Laughs] I did! I’ve gotten in trouble a couple of times. But let me tell you what happened there. I had not been watching the show at the time and I thought that news was already out. Fans were Twitter-tricking me. They were asking, “How do you feel about your character becoming a grandmother?” and “Isn’t it great that Sam’s pregnant?” And I’m, like, “Oh, yes!” not realizing I was confirming it. I was rightfully reprimanded by the network. It was an honest mistake, I swear. I would never be that stupid.”

Do you like the idea of a menopause story for Nancy and Alexis? Or, would you like to see her tackle something else? And, if so, what? Let us know!

Win a Meet & Greet with AMC's Michael E. Knight & tickets to his new play, "The Cost of the Erection"!

Just glad for her to have a story at all!

shes great whatever she does as long as shes front and center menoupause is not the end of the world!

Thank God! Bravo Nancy Lee Grahn! Women have always had to hide the change of life and it isn’t fair. It is a fact of life that all women go through this (whether we want to or not and it is NOT pleasant. Imagine feeling intense heat coming up your neck encompassing you whole head and its making you feel like you are going to spontaneously combust. That is what a hot flash or a hot flush (which can last anywhere from 15 to 25 minutes) feels like . And there is not much that a woman can do, save… Read more »

Rahter this, yes, than another mob murder plot! Did GL’s Reva Shayne (Kim Zimmer) have a similar storyline once upon a time? It is a vital honest genuine situation to explore and i hope it is done correctly, not with fanfare and then rushed or forgotten. Nancy

Menopause is a “plight?” In the 21st century, people still think like this? “Frank doesn’t like the idea of Alexis having menopause because he thinks it makes her too old.” A woman past 49 is too old? No wonder television ratings don’t include them. I think the storyline is passe and dated, but apparently many people never got the message that it needs to be done. Will male menopause get a storyline too?

I am just breaking my rule I was not going to post anymore but I can’t let this go read the entire interview with Michael Logan we are still harping on our castmate not getting an emmy .Grow Up! And if I was a lawyer I would sue her for slander leave the actress who won the emmy for young actress alone. A word to Ms. Grahn start listening instead of shooting off your mouth you might learn something. But then you are a Liberal it is ok for you to tear someone apart that did nothing to you. Stick… Read more »

Nancy and many other celebrities keep forgetting that our country is split in half and there are some fans who are republicans and what you do is insult them and at the same time loose alot of fans ,laura ingrum ,dont know how to spell her name, but she wrote a book called shut up and sing ,and it makes sense ,what she is dong is saying I am a celebrity and I am smarter then you,well shes not ,and if you ask me I dont think she is well informed,I use to like her till I heard a comment… Read more »

soaps really need to have s/l’s that are true to life as much as possible – i excited that nancy finally has her own s/l and i know she will be amazing!

I like it if it wasn’t always portrayed as a joke/extreme. Not everyone goes thru that and now there is more medical/holistic approach to this occuring.

Actually it launched at the Jasam wedding in late September, and we’ve had 2 or 3 scenes about it since then.

Oh yes! Any story about stuff Alexis is going thru – hot flashes or panic attacks from being too close to Sonny when she had the hots for him — it’s all fun! And like she mentions, GH has been mob story driven too long! And Nice Mobsters too. Guess that’s what fast-forward is for … getting past all the boring-is it ever going to end-mobster crap. TV ratings are so much about women, any stories that are related to our goings on of our bodies should be good for the show! And I love when Alexis & Diane get… Read more »

add- and Alexis having menopause now does not make her an old lady!! Hey Frank are you listening? Women can go thru and start menopause at different ages. It can start much earlier than the old tales of “old” women going thru the change in their 50-60s. It’s just not like that! And women that have gone thru it are still not “old”! that’s ridiculous!

I think a storyline with Alexis in menopause would be awesome! Going thru menopause myself it would be great to come home from a long day at work and sit down to watch GH and Alexis having hot flashes, foggy moments, and make me laugh would b great! Alexis would do a fabulous job!