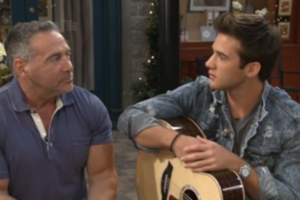 In a four part segment, On-Air On-Soaps Michael Fairman visited the set of NBC’s Days of our Lives to learn and discover how the stars of DAYS stay fit, how they look so beautiful on camera, what they eat, or what hidden talents they may have!

In this second installment, Casey Moss (JJ) shows us his guitar playing prowess and discusses playing the complex role of JJ Deveraux.  Casey even shares his personal story about his struggles in high school through landing his gig at DAYS!

Next, it’s Michael’s turn to try and learn how to play a chord or two on the guitar from teacher Casey! And well, things don’t work out to well there!   However, you will be impressed with Casey’s musical talents and our first interview with one of the hottest young stars on television today!

While Casey is not featured in Days of our Lives Better Living Book, because it was published before he began airing on the NBC soap, many of his cast mates are featured.  However, if he were in the book, this is what he would have shared!

Watch this very exclusive segment with Casey after the jump!  Let us know what you think of the talented young star after listening to what he had to say and his amazing guitar playing!

rofl…surprised he didn’t teach “smoke on the water”…all guitar beginners can play that one!! fun interview!!

Musician, AND, can ACT! what a coup for us and NBC/sony/DOOL

as a fan… gushing over soaps – let alone the actors… dag!

that was some serious guitar picking… playmenship. Nice!

Casey Moss is an amazing actor; I wish General Hospital would hire someone with such raw emotion and talent like Casey, for one of their young character roles. NuMorgan is beyond dreadful, such a coward and all he does is whine. Lauren “Kiki” is like nails on a chalkboard for me. Casey Moss is a very handsome and talented young man. “JJ” has grown on me!

Love this kid! So talented. JJ did something I thought couldn’t be done…make Jennifer tolerable again. (Sorry to the Jen fans, but Dannifer was total FF material for me until JJ & Theresa arrived on the scene. Gotta give Anne props too. She’s such a B and so fun to watch.) Good job DOOL.

Thanks for the interview Mr. Fairman. I always enjoy your interviews. One of the main reasons your site is my go-to for all things soaps!

Nice to see Casey playing his guitar on set, fitting in well. Hope to see him play his Les Paul on there. Very proud!!