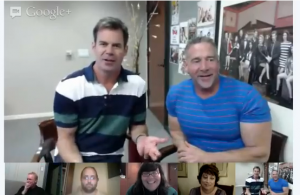 In case you missed tonight’s Hang 30 with TOLN Soaps and On-Air On-Soaps Michael Fairman, it was a laugh a minute thanks to our very special guest, One Life to Live’s Tuc Watkins (David Vickers)!

Throughout the Google Hangout Chat, Tuc fielded questions from four participants who are fans of OLTL who also revealed their favorite moments of Tuc as David Vickers including: David’s patriotic speedo on the Fourth of July episode, scenes with Dorian (Robin Strasser), David Vickeroshi the Buddhist, and much more!

In addition,Tuc filled fans in on some One Life behind-the-scenes moments including : what he and Bob Woods (Bo) thought when they found 0ut David was going to end up being Bo’s biological son, and the most ridiculous line of dialogue he has ever had to say on a soap! We also learned why David is dressed “John Travolta-esque” a la Saturday Night Fever in scenes revealed on the release of  One Life to Live‘s Ffrst Look sizzle reel, which has David dancing at Club Shelter!  New episodes of One Life begin on April 29th!

After the jump, watch the entire Hangout with Tuc, Michael Fairman and some very avid One Life fans! Then, let us know what you thought of it? What was your favorite moment with Tuc from the chat?  And, who from One Life would you like to see next as part of the chat series?

BREAKING NEWS: Prospect Park Suing ABC Over All My Children & One Life to Live Licensing Agreement!

It was an amazingly fun time. I would love love love to have Shenaz (Rama) or Kelley Missal, or from people not on the cast again (yet) I would love to see John-Paul Lavoisier or Farah Fath

I enjoyed watching the interview.. It was good!!
and it was good to see you both 🙂 Michael and Tuc..

Very fun Michael and Tuc and all!! Tuc is so funny and he really engaged and had fun with it!!! These are a fun format and have a lot of potential!!! I hope you do some for other soaps too!!! Keep them up and can’t wait for the next one!!! Would love to see you do Robin and Erika!!! Thanks Michael!!!

OLTL is one big family! You laugh,cry,& really get involved with the stories! It is a special
soap opera to me.

Liked Dorian & David together! They look good together!

There should be an interview with ROXY!

How about Josh Kelly (Cutter, OLTL) since he lives in the L.A. area in your neck of the woods for your next “Hang 30 with TOLN Soaps” live chat video?

I want M ichael todoo an interview withhis shirt off!

What a great interview! Thank for posting Mr. Fairman.

Thank you for being one of the leaders who fought to bring back OLTL. Since ABC announced the cancellations, you’ve been a primary source of information.

By the way, I’d love to see Roxy and Lindsay back on the show. Do you know anything?