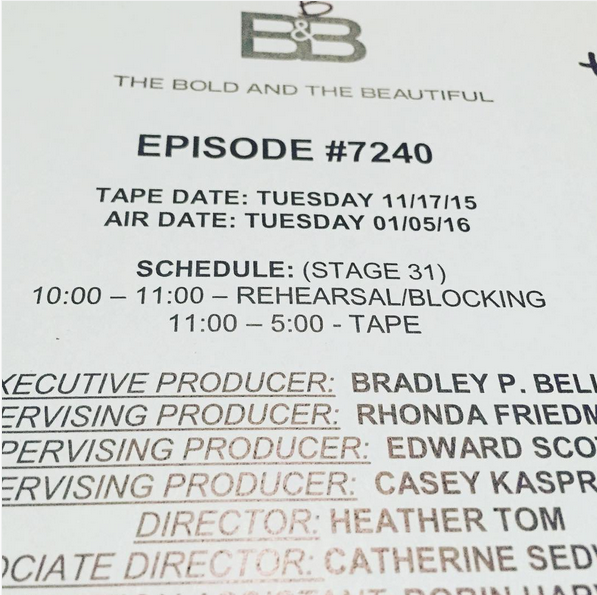 Very popular female soap stars in front of the camera, who are also going behind the camera and directing episodes of the soap they work on, another daytime drama, or outside projects is always rewarding to see for fans of the genre.

Former B&B icon Susan Flannery (Ex-Stephanie) directed episodes of B&B during her 25 years with the series.  Alison Sweeney (Sami, DAYS) has directed episodes of Days of our Lives and General Hospital, while Kimberly McCullough (Robin, GH) is directing primetime television projects, while also returning for story arcs to her soap home.

Today, five-time Daytime Emmy winning actress Heather Tom (Katie Logan Spencer) announced via Instagram that she was indeed directing her first full episode of B&B!  Heather related her excitement with a picture of the top of today’s script which names her as the director.  She added: “I’m directing my first full show for The Bold and the Beautiful CBS today- wish me luck!”

What do you think about these great soap actresses also directing behind the camera?

Good for her. B&B hasn’t written for her in at least a year, so it’s good that she’s channeling her creative energy in another direction.

uhhhh beth she’s involved..but this whole i’m an actress i wanna direct kick ..as well as actors..who don’t care as much…is a bit taxing..you’re directing peopl comfortabe in their own skin and character..direct newbies if that is what you want to do..newbies in a challenging episode..so sick of these silly articles about actors directing..sorry Mr.Fairman but just don’t…

Disagree. Tell me, are you just insulting female actors who want to direct as frivolous, or actors in general? Did you think Ron Howard, Kevin Costner, Mel Gibson, Clint Eastwood, George Clooney and Ben Affleck were all frivolous & being “silly” when they were nominated/won Academy Awards for their directing efforts? All directors start at the beginning, and they should be commended for going out of their comfort zone to try something else. Paramount had an actual directors program in their STAR TREK series that many actors participated in. That’s how Jonathan Frakes made the transition from actor to director.… Read more »

i really hope she does well in the field of directing because her acting talents are being underutilized over at b&b…………………..

Katie needs a storyline, so good for her for keeping busy and learning new skills and nice that B&B encourages it.

it was prolly an episode about planned parenthood her cause celebre

I think Heather Tom is the best actress on any soap ,If anyone can direct ,heather can she is the best .

I Think it is great. She is a wonderful Actress.

I agree she is the best