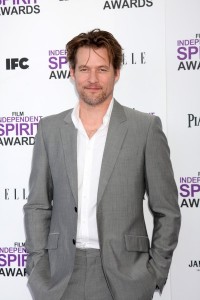 If you watched the season three finale back in May of ABC’s Revenge, you know that none other than David Clarke, Emily’s father and the man who the Grayson’s destroyed, was revealed to be very much alive!

And now according to TV Line, actor James Tupper (David Clarke) who has recurred throughout Revenge‘s run, but his appearances had been confined only to flashbacks, is now confirmed to return in season four and will become a series regular!

After three seasons of Emily (Emily VanCamp) wanting revenge on the Grayson’s for “killing” her father and their part in it, with David not being dead after all, what does it all mean? And at the end of the season three cliffhanger, it looks as if David stabbed Conrad Grayson (Henry Czerny) to his death!  Revenge showrunner Sunil Nayar previewed for TV Line his plans for David Clarke’s arrival on the scene after being presumed dead: “Victoria and Emily are both going to have to reckon with what they’ve done in his name over the last 20 years, and then they’ll have to reckon with, ‘Well, who is this man?’ It’s fun because, for the first time, the audience knows something that none of the people on the show do. The audience knows what he did to Conrad, they know what a raw act of vengeance it was. So the David that’s eventually going to come back to town isn’t going to be the David that the people in the Hamptons know, but the viewers have seen him and know what he’s capable of. That’s a fun dynamic we’ve never gotten to play with before.”

So what do you think about James Tupper being made series regular?  And what do you think happened?  Where was David Clarke all this time?  If he was in hiding, why wouldn’t he have let his daughter now? … because he thought through her he could get retribution on the Graysons by pretending to be dead?   So many questions to be answered in season four.

Alison Sweeney Talks Her Emotional Final Tape Day At DAYS, How The Door Is Left Open For A Return, Her New Book Scared Scriptless on Access Hollywood Live!

The Bold and the Beautiful To Shoot On Location In France!

I think it’s a great twist to have him alive, and I’m all for him being made a series regular!

Great news for the actor but I can’t help feeling like Revenge has run out of steam.

The next season will be awesome!
There will be new players and the core as to what the Revenge was about returning alive and I presume out for revenge!!!

Interesting play of events; as in real life always frustrating if something bad happens for what seems like no rhyme or reason. Example: A good samaritan goes to help a crime victim and gets hurt or killed.

Relative to REVENGE sooooo many lives have been lost in the name of Emily sense of justice/revenge. And now…for what???

I’m looking forward to how they twist this and the impact on all the characters…as well as the dynamics between characters. My only regret moving forward to this next season is the loss of Aidan/Barry Sloane.