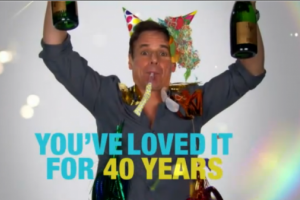 CBS Daytime and The Young and the Restless have just released their super-sized celebration promo honoring the number one soaps upcoming 40th anniversary!

As it entices viewers to “Join the Party” and with the slogan of  “You loved it for 40 years, now it’s giving you even more, more, more…”  the cast dances, prances, and goofs around with party hats, streamers, confetti, champagne and more!

See if you can spot everyone and let us know your favorite moment in the promo!

Victoria Principal Issues Statement Revealing She is NOT returning to DALLAS!

It’s about time they put a promo up.

Sharon and Adam are my favorite couple

Love Amelia Heinle and Billy Miller are awesome! Their coupling is the only reason I watch Y&R.

I think they need to recast Chelsea. Chloe also. Boooooo

I watch on occasion but its 40th doesnt excite me as much as GHs upcoming 50th, and that one is more worth celebrating.

Katherine and Sharon are my favorites. Drucilla was ok but i liked Olivia better.

Great promo! So much fun!!! I’m not even a fan of Y&R and that was really good! I wish the show was as lively, exciting and colourful as the promo lol.

Josh Morrow’s bit was my favourite. That guy is such a ham!

I watch Y&R on occasion but its 40th just doesnt excite me as much as GHs upcoming 50th, and its far more worth celebrating. Dont see YAR on as many mags as GH or talked about as GH which in my book makes it the no. soap in daytime no matter what the ratings are.

plus i still wish yar happy anniversary no matter which soap i feel is the best. i try to support the last few soaps there is because im not a fan of talk shows.

Elizabeth Hendrickson blowing champagne out of her nose!!!

Mine, too! I couldn’t stop laughing for a couple hours.

That, and:
– Amelia’s adorable running man at the end.
– Billy getting confetti dumped on him, and a green piece of confetti landing on Amelia’s forehead.
– Greg and Liz dancing like they’re a 24-hour dance-a-thon, fanning themselves with 40s.
– Jessica trying to blow out the 40 candle to no avail.

That’s it. But this promo is beyond fun! One of my favorite in years.

Did Melody Thomas Scott and Jeanne Cooper miss the promo shoot or will there be other similar spots to run as the day nears? Give me more of them, too!

I like that better than the cast of PERSON OF INTEREST promoting Y&R’s 40th. When I see those promos it makes me think they were forced to do it. There is no feeling. I guess all of the actors in CBS’ more popular shows had better contractual terms.

The Y&R is ridding the #1 soap General Hoispital’s coattail on this one, for sure .. 🙂

LOL. Y&R is the number one and always will be.

So Happy to be celebrating my 40th birthday alongside Y&R this year. This was my very first soap opera that my mother raised me on and have always watched off and on throughout the decades. I have LOVED all the characters from the show and so glad to see a promo for there upcoming birthday. HAPPY Birthday Y&R and here’s to many more years on the air.

Even thought I’m not a regular watcher, i send my congrats to Y&R on hitting the big 40!!

That was original and adorable. Just wish my Melody Thomas Scott was in it!

Perhaps MTS just wasn’t interested in doing a promo like that. Not everyone is comfortable doing silly gags like the ones shown- so maybe she passed.

I don’t know. She was up for a comedy before she picked Y&R. So I’m sure she has comedy deep down inside. Plus, she could have done what Eric did and just toasted to the audience.