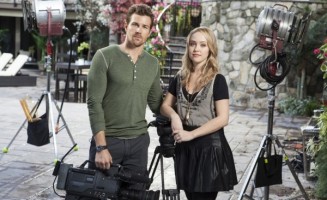 After airing just five episodes of the new drama UnREAL, the Lifetime cable network has already handed out a second season of the series ordering ten episodes for the 2016 season!

As One Life to Live fans know, the series co-stars Josh Kelly (Ex-Cutter Wentworth).  Kelly and cast have had great numbers out of the gate for a new show on cable averaging nearly 5 million viewers per episode across all platforms.

“We couldn’t be more proud to bring back UnREAL,” said network executive vp and head of programming Liz Gateley. “With authentically flawed characters, sharp storytelling and impeccable performances, this show is propelling our brand in a truly exciting direction — an unexpected and bolder Lifetime. We are thrilled to continue our work with Marti and Sarah and the incredible A+E Studios team, as we together bring a new generation of viewers to Lifetime.”

At the epicenter of the series is the story of producers who are putting together a “Bachelor-esque” reality dating competition series entitled “Everlasting”, and the storylines follow what goes on behind the scenes of a network reality show.

Have you been watching Josh in UnREAL? Happy to hear it’s coming back for a second season?  Comment below!

THE YOUNG AND THE RESTLESS: Lily's Confession To Cane … She Slept With Joe!

UnREAL surprised me with how fabulous (and sexy) it is. It took an episode and a half to get used to the grit and tone of the show. The story and machinations of the characters are fascinating. Not to mention the incredible sexiness of Josh Kelly and Freddie Stroma. I encourage those who haven’t seen it yet to give the first two episodes a try.

Ya…I, too, am just starting to watch it. Like it!

I am not a fan of many primetime dramas, but I have to say, despite the graphic raunchiness at times, I find this show VERY entertaining. Glad to hear it will be on another season. Hope Josh gets a bigger role next season!