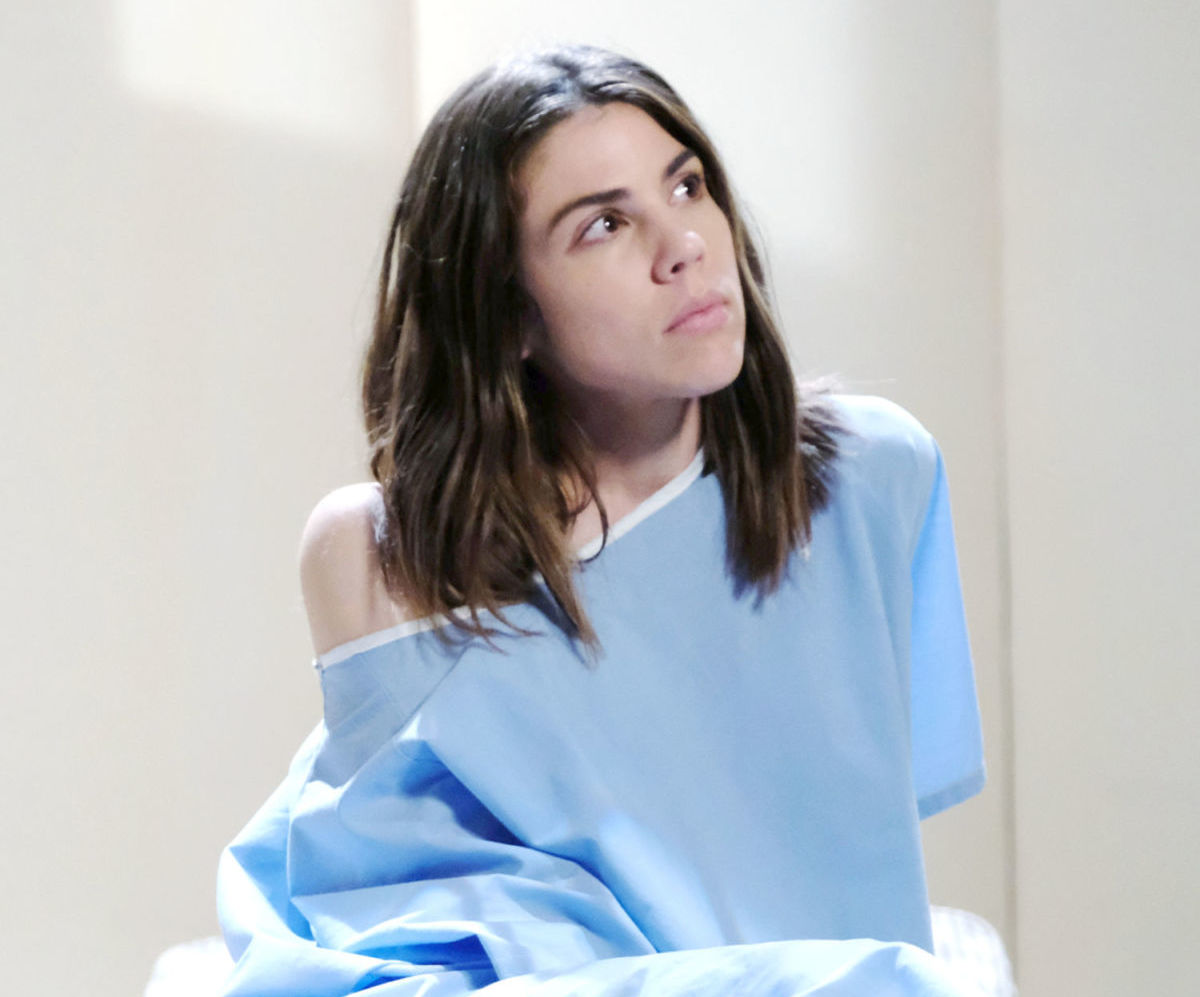 If you caught last week’s Thursday and Friday’s episode of DAYS, you know by now that Kate Mansi has taken over the role of Abigail on-screen from Marci Miller, thus continuing the gut-wrenching storyline where Abigail has been committed to Bayview sanitarium wrongly, thanks to Gabi Hernandez (Camila Banus)!

Now resuming her role, Kate is involved in emotional story points. Abigail has told Chad (Billy Flynn) she never wants to see him again, because he refuses to let her out of the sanitarium, and does not believe she is not suffering from DID.

Abby’s next move was to summon Stefan (Tyler Christopher), where she tells him that she is Gabby with a “Y”.    Has she flipped into her alter, or is this a set-up to get Stefan to get her out of Bayview asap?  If so, how will she continue this charade?

Mansi told Soap Opera Digest (in the latest issue on Newsstands now) on her return and reacquainting herself with the character of Abby and Abby’s alter “Gabby” for the first time: “Before I started people were informing me about the real differences between Gabby and Abigail, and it came down to Gabby acted more from her emotions, and Abigail is more rationale, and that Gabby was a little more brave and self-assured.  That was the most difficult thing for me to adjust to because all of the qualities they were telling me of Gabby were qualities that I strongly connected to and enhanced with Abigail.”

So, are you enjoying see Kate back in action in Salem?  What do you think will happen next between Gabby and Stefan? Comment below.

I mean no disrespect toward Kate Mansi, who is an incredible actor, but I am a huge fan of Marci Miller. I will miss Miller in the role!

Afraid i got hooked with Marci in the role. The first few days she was on after she took over were a little tough because I was so used to Kate but after seeing what she did for the last 2 years, it’s going to be very hard for anyone to nail the part of Abigail no matter how good Kate was when she played her. Marci gave Abigail new layers and what a power she was.

Agree with you…Kate’s acting is not strong enough to match Marci’s as the character has become much more evolved…hope Abby stays committed off camera after awhile.

I agree 100%. I wish they would keep Marci as Abigail,she was great . No doubt another soap will scoop her up quickly. Great actress

I said Kate was a great actress… but I like Marci! No hate here!

I am thrilled to see Kate Mansi back. I enjoyed her so very much during her previous run as Abigail. I hope she’s going to stick around a while.

Sadly.. it’s not going to happen…Billy Flynn is slated to wrap up around V day so i imagine they ride off into the sunset… I LOVE Kate Mansi.. to me she is Abigail.

I love that Kate is back.

I really enjoyed Kate Mansi as Abigail during her original run and was super bummed when she chose to leave the role; I really did not think anyone could take her place. That is, until Ms. Marci Miller stepped into the role and completely rocked it! Her take on Abigail was complex and very well-thought out. Now, with the switch back, the role of Abigail seems hallow under Mansi’s return. Something about Miller’s brilliance and complexity in the role has really made it impossible for Mansi to step back into those shoes, and to truly portray the role right. Ultimately,… Read more »

I loved Marci Miller, but also love Kate Mansi… On Kate’s first day back, I was like Marci who? I’d be fine if they rotated back and forth like the two Becky’s on Roseanne.

Marci Miller is a powerhouse, I’m not sure Kate Mansi has the same acting chops. I prefer Miller’s take on the character. I wish both actresses luck.

I think that Kate hit it out of the ballpark on Friday. Both actress do a fine protrayal of Abby. It just takes some getting use to when they switch actresses like this.

Sooo glad to see her back!

Never cared for the character of Abigail until Marci Miller assumed the role and after seeing Kate Mansi’s interpretation of “Gabby with a Y” on Monday’s episode, I am ready for Ron to just write the character off the show or leave her off camera in Bayview…

I believe it was Abby’s interpretation of Gabby with a y, Alan, because the alter hasn’t emerged. It’s just Abby tricking Stefan so he has her released.

As much as I liked Kate,I grew to love Marci in the role of Abby. I just wished they could have dressed her better, she deserved more than the dowdy clothes she wore, making her mother look better. She made Abby come to life and in a more grownup and sophisticated way. Liking Billy so much, it was hard to see his character change the way it has, and felt sorry for Marci in scenes with him crawling out of his skin, with all the stammering and stuttering and weird eye movements. In scenes when he’s telling his wife, she’s… Read more »

Sorry Kate but I am a Marci Miller fan.I like you to but I prefer Marci more.I hope she decides to come back some day. If she has to play someone else so be it. Oh Kate I did see you in a couple of Lifetime movies and you were very good in them.Don’t mean to hurt your feelings but Marci was Abby.

I am SO happy that Kate is back! Her acting is far superior to Marci Miller and so is her beauty. It is such a joy to have her back. My friend and I complained every day for two years about Marci so we are thrilled to see the real, one and only Abigail.

I will miss Marci as well but we have to understand that Marci should of finish this story line before Kate jump in . I for one love Kate and I am so happy to see her so lets try and give Kate a chance like we did with Marci with the role she has to fill of Marci story line .. It would of been different if Kate came into the picture with a new story line but she did not .. I will miss Marci but I am so happy to see Kate back on Days

I’m so happy that Kate Mansi is back as Abigail. She brings so much life/energy to the role that was is much needed. She’s so beautiful also, and brings out the sexy, especially as Gabby. I know she’s back for a few months to wrap up the story, but I hope she comes back as Abby in the near future.

So glad to see Kate back. I hope she is coping well with her anxiety. I can sympathize!