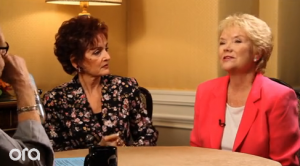 As we first told you at On-Air On-Soaps last week, several of the core cast of One Life to Live would be appearing on legendary talk show host, Larry King’s new Hulu and Ora.TV show, Larry King Now!

Well, today Monday the episode featuring many of your favorites from Llanview has been posted! Check out the engaging interview between Larry and the iconic, Erika Slezak (Viki) and Robin Strasser (Dorian), where the ladies inform King on what the basis of the series is all about, their beginnings on OLTL,  Agnes Nixon,the importance of the feud between Viki and Dorian, how they heard ABC canceled One Life in the first place, and more!  This portion was filmed in New York.

Following the Slezak and Strasser interview, was a very fun and lively interview with Melissa Archer (Natalie), Tuc Watkins (David) and Corbin Bleu (Jeffrey) shot in Los Angeles last week, were the trio talk about the resurrection of the series, what might be coming for their characters, which if you listen sounds intriguing, and how they deal with many of the soap cliches; such as those classic facial expressions when characters have to react to shocking or upsetting news!  During this segment, Larry King took some questions from social media from fans of One Life too!

Watch the entire episode below! Let us know what you thought of it? What was your favorite answer given by Erika, Robin, Tuc, Corbin or Melissa?

Les Moonves on Future of CBS Soaps: "We Believe They Will Be On For a Long, Long Time!"

yaahhh!
I really enjoyed watching that, thanks Michael!

That is so great, watching it now!

It was a great interview. Saw it last night after watching this week’s episode. I think this show has a bright future and do hope they return to network TV or even cable.

Enjoyed the interview thoroughly. All were enthused, charming, dedicated, they give it their all & want OLTL succeed:)!!! As a longtime fan so do I!!:)

This is wonderful. Thank you for posting this. I love seeing these wonderful actors outside their characters. I love OLTL!!!!!!!!!!!!!!!!!

Loved the interviews! I see a bright future for the OLTL reboot!

Loved the interviews with everybody. I see s bright future for OLTL!!

ABC make a HUGE mistake when they removed both One Life to Live and
All My Children from their Daytime schedule. There will always be a viewing audience and it’s preposterous to think otherwise. The shows can’t really get “stale” because there are new storylines and new characters added in on a regular basis and I think that soaps will return to afternoon slots in time. However, on-line viewing shall also continue to grow, so it will be interesting to see how it all plays out.