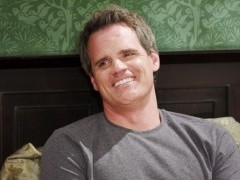 Daytime Emmy winner, Michael Park (Jack Snyder) caught up with Zap2it.com for a brief chat about the upcoming finale and his final thoughts as As the World Turns leaves the airwaves next Friday, September 17th.

Park stated that he knew that once the other P&G staple show was headed for soap heaven, ATWT wasn’t far behind, “Personally, I knew the show was going to be canceled when Guiding Light was gone. We didn’t ‘know know,’ but we knew the show was in its last stages. I remember thinking, ‘It’s over,’ and Maura West (Carly Tenney) saying, “Michael, what’s wrong? We’re still making shows,’ and I said, ‘Yeah, but for how long?’ “

Park went onto to reflect that the final days of production in Brooklyn were heartbreaking.   “The final days were sad.  The sets were being dismantled and sold, and people were talking about buying their wardrobe and props — whole set pieces, beautiful things from the Falcon Club which I totally had forgotten about, and people’s names were placed on various set pieces to take home. You couldn’t help but feel this melancholic cloud over you for those last two weeks, but I have to be honest, it was also kind of exciting to wonder, ‘What is going to happen next?’ ”

Y&R's Lauralee Bell comments on past tabloid backlash of being boss's daughter!

Who will be the next Joey Buchanan on One Life to Live?

Loved Michael Park and Maura West as Jack & Carly. Going to miss them. They were my all time favorite couple until Luke & Reid came along…