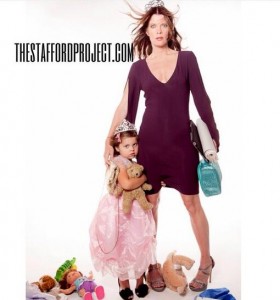 The Stafford Project is a bonafide hit! The web series developed and created by two-time Daytime Emmy winner Michelle Stafford with her pals Paige Dorian And Paige Long has been must see viewing every time Michelle announces a new episode is about to be posted!

In an full-length interview with Soap Opera Uncensored with a few quotes also posted from it in a joint piece with Huffington Post Canada, Stafford relates what the plans are for the series:  “When you’re doing a show like this, you don’t necessarily think of the outcome more than doing something truthful that people can relate to. There are so many people who want to jump on. We have a lot of production companies who want to take us to the next level saying, ‘We want to package it and take it to Netflix.’ We’re like, ‘Huh?’ So, my partners and I made an agreement to finish the 10 episodes. This way no one can come in and f–k with it. We wanted a complete arc for this character, so people can see the season and get who this woman is. We didn’t want anyone to come in and change anything because that’s just the worst.”

Recently, Stafford revealed on Twitter that she was auditioning for a role on ABC’s primetime series, Scandal.  She spoke of why the decision to let her followers know which is in line with letting the fans know she is not coming back to Y&R any time soon!  “I know I shouldn’t have tweeted that (considering the jinx rule), but there are so many fans who tweet me daily about coming back to ‘Y&R.’ As much as I totally appreciate it, I’ve moved on. I guess because Phyllis is in a coma, I’d say about 35 percent of fans think I’ll come out of it. I’m not, but watch “The Stafford Project.” I don’t want to hurt anyone’s feelings but I’m doing other stuff.”

As for the hilarious star-turn appearances by Kelly Preston and former Y&R cast mate Joshua Morrow (Nick Newman) that has had fans totally abuzz with the show and how that came about,  Stafford said ,”The only episode that wasn’t planned was the one with Kelly Preston because she really wanted to be in the show, so we wrote that special just to put her in it and throw in the soap opera aspect. With Josh Morrow’s episode, Josh came up with the character, so we did that right away because we thought it was very funny.”

So what do you think of The Stafford Project and where it is heading? Wanting to see more?   Let us know!

Susan Lucci Set For A Return To Hot in Cleveland!

good for michelle. she is a wonderful actress. now they need to recast the role of phyllis. recast her with liz keifer ex blake guiding light. oh also robin christopher ex sky gh. both of them are great sexy ladies, who can act.

How about recasting her with Cynthia Watros?

Yes… I am happy for Michelle!

I’d love to see her on Scandal…my favorite show!

Looks like she is having fun so I for one am happy for anyone who is doing something they love. Do I want a recast NO! JFP has moved away from this character and has other stories she is telling and once she finishes putiing the rest of the nails in the character of Sharon she will be thrilled. I hop SC finds something she loves I wish she had the guts like MS to just walk.

Great. Hope you get the job. Sure most of your fans want you back at Y&R, that’s where we first met you and became your biggest fans. You’ve moved on and when the great Phyllis is recasted we will move on as well. We truly wish you well with all things.

Bittersweet Michelle. Y&R fans want you back so bad because of who you are and how pivotal your character is BUT with your talent, daytime loss is everyone else’s gain. SP is so good and it is nice to watch something for only about ten minutes and be totally fulfilled. Your show is like popping one of the Andes chocolate mints in your mouth when you have a craving for chocolate. Yummy!