On Monday, Days of our Lives long-running executive producer, Ken Corday will become part of Hollywood royalty when he gets his star dedicated on the Hollywood Walk of Fame by the Hollywood Chamber of Commerce before invited guests and the media.

The ceremony will begin at 11:30amPST and it will be live-streamed for fans around the world to see via the Walk of Fame official website at www.walkoffame.com 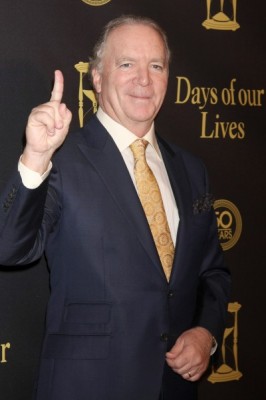 “Ken Corday has dedicated his life to entertaining television fans with NBC’s longest running drama series, Days of our Lives. We will be placing the star for Ken next to the star of actress Deidre Hall (Marlena), keeping Days of our Lives forever cemented in the stars!” said Walk of Fame Producer Ana Martinez. “This is a perfect welcome to align Corday’s star in our family of Walk of Fame!” Helping Emcee and Hollywood Chamber President/CEO Leron Gubler to unveil the star will be guest speaker and fellow Walk of Famer actor, Andy Garcia.

In addition, Monday is also the debut of the online adaptation of Ken Corday’s novel, Ladies of the Lake featuring many soap notables debuting on Amazon!

Make sure to watch the festivities live Monday morning. But before then, check out On-Air On-Soaps video interview with Ken on the red carpet of the 44th Annual Daytime Emmy Awards after the jump. Corday talks about how much everyone is looking forward to the debut of DAYS new head writer, Ron Carlivati’s stories to unfold beginning in late summer.

TODAY: LADIES OF THE LAKE Makes Its Highly-Anticipated Debut!

I’ve tried “googling” to see whether Ted or Betty Corday have a star. his parents… executive produced and are the creators of “Days of OUR Lives” from 1965 to 1985. Ken Corday has since taken reign from then on. he seems to “win” emmys for what he’s trained at… music. I don’t know… @DAYS has its dark days. I truly think, ever since, James E. Reilly, headwriter, died. DAYS has struggled I’ve never thought Ken Corday truly minded the store… it was all in place… and things as they say.. never are the same again. GOD love this genre… I… Read more »

I so agree with you Patrick…I watched the dedication and i enjoyed listening to Ken and hearing his story…I think Day’s use to be so good and was a joy to watch but I don’t watch it anymore…it’s lacking of how it use to be and I so miss those DAYS. I think the only show that is the same as it has been since the beginning is Bold and Beautiful…I do like Y&R again since Sally and Kay returned even though a lot of people don’t, the only thing that is missing from Y&R is their classic background music…I… Read more »

Do either of you know when Ron Carlivati’s writings will start????? This show is driving me crazy..how many times can Chad and Gabby be “kidnapped/held at knifepoint/locked in a vault” and is there no way to contact NBC or Sony and ask that they change the scheduling/taping to at least six weeks…this six months ahead taping seriously is killing this show…..sorry to rant…just don’t want to see Days cancelled while Ken C is out creating new shows like Ladies of the Lake….

I’ve mentioned on this site… hoping that @MF will thread the premiere airdate of RC’ scripts. I’m with you… rant on yeah… from what few posts I’ve read… this lady of the lake… argh ! is not going any where. which speaks volume … of Ken Corday OWN creativity. I don’t mind putting this out their. what the heck can one say… his career was all started by his parents. and to see him in complete disregard.. if you will… that he owes his parents legacy respect and due diligence. I really enjoyed RC writing on GH. I so hope… Read more »

Ron’s material begins approximately 40 episodes from now, Scott H. Mid July is what one of his writers said in a tweet.