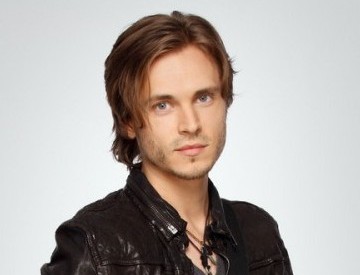 Fantastic news today from Jonathan Jackson via Billboard!  After many years as an independent recording artist, Jackson has landed his first record deal with Loud and Proud Records!

According to Billboard, for the star of ABC’s Nashville and five-time Daytime Emmy winner for General Hospital, the signing comes as a breath of fresh air for Jackson, finally breaking into music as a signed artist, rather than doing all the work independently!

“It felt like the perfect timing for everything,” he says of the record deal. “The last decade, really, I’ve had an amazing time just working really hard developing a sound and continuing to write songs and play everything. So I’m really grateful for the time that we’ve been doing things independently, but at the same time it feels great to have this happen.”  Working on a TV show like  Nashville, which features vocals from its cast members (as well as the occasional songwriting credit, too), is a fairly effective way for musicians to get their names out there, whether the program takes off in a big way — see: “Glee” — or not. As such, Jackson figured right off the bat the show would at least gain his music more exposure — though he didn’t necessarily see a record deal on the horizon immediately.

“Being a part of a show like Nashville, [with] the music side of it, I knew from the very beginning that it was extremely important and that they were obviously putting a lot into it,” Jackson says. “It was pretty easy to see that at the least, I would get more exposure as a singer. For years, I’ve thought about a project or a way where I could do acting and music together, and I never really thought that would happen. Then Nashville came along, and it was like a dream come true to marry both of those worlds.

“At the same time, the last however many years of my life, I’ve started to get to the place of not having expectations about how things are supposed to turn out and really just try to live day to day. So I haven’t thought about the specifics much, but I knew the exposure was there.”

The deal with Loud & Proud puts Jackson in a direct relationship with label head Tom Lipsky, who told Billboard he’s incredibly excited for the opportunity to work with the actor and his band, recounting their first meeting. “It was a combination of his music and how charismatic he was,” Lipsky says. “His band did a private showcase for my team — about a 45-minute set — and I came away thinking [Jackson] was an absolute, unequivocal rock star.”   A timetable for an initial release has not been set, though Jackson, like most of his ilk, says he’s been recording and demoing music for quite awhile, with the record deal giving those sessions a “concentrated vision.”

Congratulations are in order today to Jonathan!  The world will soon hear his exceptional musical talents with the help of a label now supporting him!  What do you think of the news? Let us know!

GH Smackdown Morgan Corinthos Vs. Michael Corinthos! Who Should Be Victorious?

Congratulations…………Looks like the record industry has realized what us GH fans have known for years……Jonathan Jackson is not only a fabulous actor, but is also an outstanding musician. Once again, congratulations….

Good for him! GH should seriously grab him back from Nashville!

Congratulations Jonthan!!! It’s well deserved and you will be awesome!!! So happy for Jomathan and his band and their families!!! Thank you Nashville/ABC for hiring JJ and affording him the opportunities for his musical talents to shine!!! At some point in your busy career we would still love to have you stop back at GH for awhile!

So very happy for Jonathan Jackson. He deserves the best. Have followed his career since the early days of Lucky on GH. Congrats to Jonathan

So happy for Jonathan, he has a beautiful voice and talent for singing and writing. I do miss him as Lucky on General Hospital. Congratulations to one of my favorite stars of “Nashville”.

Good luck. Love the song he collaborated with Steve Burton on.

That is wonderful… I am so happy for Jonathan!!

Hope it works for him. Low-key and not well known labels seem to have become more popular in recent years, so hope this works for him. Never been a big fan of his, though!

Just glad he’s not coming back 😉

Why? You don’t like having anyone as talented as Jonathan Jackson or as multi-layered as Lucky Spencer on General Hospital?

Or who could cry from the start of the episode to the end ….

Yeah. Exactly. Excuse me if the number one reason I’ve never gotten into another soap besides GH is because the actors are laughable when they attempt to cry because they shed no tears. If you have an actor that can rip the audience’s heart out because they can actually…well ‘ACT’, that’s something you want to take advantage of.

Yes! I hope JJ NEVER returns to GH since I hate Lucky Spencer with the passion of 1,000 suns!

Your crazy. Jonathan Jackson and his portrayal of Lucky Spencer on General Hospital was epic and iconic on every level! He is sorely missed and his absence in Port Charles leaves a void that we can only pray will be filled if/when he returns to the show one day.

Please. JJ’s return was a dud. Lucky spent most of his time crying or staring at a pill on the floor. I hope the actor stays in primetime and never returns to GH!

Apparently Jonathan Jackson just has me and two consecutive Emmy Awards that beg to differ with you and Joshua about his latest ‘dud’ of a stint on General Hospital. I didn’t realize that that pills were the crux of his storylines revolving around the death of his little boy and his brother Nikolas’ affair with the love of his life Elizabeth, or that these storylines didn’t require lots of real tears and superb acting skills. I’m sure he feels bad that he didn’t deliver the sub par performances that fans of CBS and NBC soaps enjoy! Yeah, what a ‘dud’.

Congratulations and I’m so happy for him. Big fan of Jonathan and his music. Rarely a day I don’t listen to Enation’s music.

Thrilled for him! He has worked so hard for this.

So thrilled for JJ. I wish he’d come back to GH though.

Yay for u Jonathan. You deserve the best,

I miss Lucky on GH but, I wish Jonathan only the best. A great musical career if that is what he wants. This is great for him. I watch Nashville ,only because of him and they don’t give him nearly enough to do. Hope you take this all the way to the top.

I’m excited to see it happen J. Jackson has a great voice and tons of talent way to go!

I’m a big fan of Enation and Jonathan Jackson is unbelievably talented. He really knows his voice and the result is always unique and chill inducing. I see him evolving into a pop rock superstar and he also excels in the slow build of powerhouse heavier adult contemporary love songs. The depth and raw emotion he achieves in his music is pure magic. I sincerely hope that he steers clear of taking his music career in a ‘Nashville’ or Country genre direction. I think it just doesn’t showcase his talents properly and isn’t true to his brand.