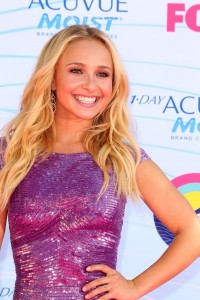 Wasn’t it just yesterday that it seemed soap fans were watching the amazing performances of little Hayden Panettiere as Lizzie Spaulding on Guiding Light who was battling leukemia?  Well, that little scene stealer has grown up to be quite the actress. and now a new mom in real life!

Big news this week has that the Nashville star, where she plays country/pop singing sensation Juliette Barnes, gave birth to a baby girl!

US Weekly revealed that Hayden and her fiance Wladimir Klitschko welcomed their first child together on Tuesday December 9th.  The new little bundle of joy is named Kaya and weighed-in at 7 lbs., 14 oz., and measured 20 inches. The parents, Panettiere and Klitschko, briefly split in 2011 after two years of dating, before rekindling their romance in the spring of 2013.

Hayden continued to film new episodes of Nashville throughout her pregnancy, and in the midseason finale that aired this past Wednesday where Panettiere was still pregnant on-camera, in story Juliette tied-the-knot with Nashville baby daddy, Avery (Jonathan Jackson).

Congratulations to Hayden and Wladimir from On-Air On-Soaps and the newest addition to their lives! Share your congrats below for the proud parents!

THE BOLD AND THE BEAUTIFUL: Hope Moves On In Kim Matula's Final Episode!

I’d bet we will see her baby girl on Nashville..

Hope she is as beautiful as her mama. Congrats

Congrats to you and your lover! Get married already.