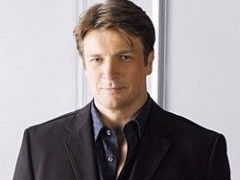 Leave it to Nathan Fillion to continue to never forget his soap roots and One Life to Live.  Nathan was the most popular of all the Joey Buchanan’s of Llanview.  Now the star of ABC’s hit primetime drama series, Castle which is about to premiere its fourth season this Monday night on ABC (10PMEST), Fillion had lots to say about his hopes for his on-screen alter-ego in the new season in an interview with AOLtv.com.

But of most interest in the piece was when talking about who Fillion would like to see play Castle’s dad. And, he said he would like it to be Robert S. Woods (Bo Buchanan) of One Life to Live. Apparently, he got all choked up just thinking about the possibility!

Nathan revealed, “There are tons of people I would love to see, but less than famous and more personal for me, I would like to see the guy who played my uncle on my first job, my first soap opera One Life to Live, Bob Woods. He played my uncle Bo [Buchanan]. I’d love to see him come in and play my dad. For me, that’s … personal. That man actually means something to me. He’s the fellow that said, “Hey man, you’ve got to wrap up this soap and move to L.A. You’re gonna do well out there.” He’s the one who sat me down and gave me the courage to pick up and leave New York when they offered me an extended contract.

There are certainly lots of names I could throw out there — I’ve joked around saying Chris Walken would be great, but I doubt Chris Walken is gonna come and do Castle. I think he’s doing alright. But the more personal stuff would be cool.”

We think Bob Woods as Castle’s dad would be terrific! What do you think of the Nathan’s casting choice?

That would be great as a short arc but I want Woods to stay with OLTL!

It would be so good on so many levels I hope he makes it true! I think Bob Woods is a wonderful actor and he has the same kind of casual style of acting that Nathan has – they would be a wonderful father son combination. How can we fans help make this happen? Any suggestions?

Love Ya Nathan but I don’t agree & only because then that would mean a possibility of RSW not going on to PP 🙁 and that thought saddens me greatly.

That would be awesome but would love Robert S Woods to stay on One Life To Live as his number 1 job would miss him to much as the comishner of landview and husband of Nora played by Hillary B Smith could never see the show the same way.

I’m continually impressed by what a great guy Fillion is!

Nathan sure is really loyal to his soap family members. What a wonderful, loyal, lovable guy he is–wow! 🙂

i remember bob woods from when he was on the waltons – he is an awesome actor & would be excellent on castle!

A big thumbs up!!! I love that guy Bob Woods!

Fabulous idea on all sorts of levels!!! And for all those worried about it meaning Bob Woods would leave OLTL, I doubt we’d see Castle’s Dad more then a couple episodes a season, which would likely focus heavily on their relationship, maybe with a great murder investigation bringing them together. I’m sure Bob Woods could do both.

And seems to me Bob has more then earned some prime time air time. I 100% adore the idea, and hope Nathan can make it happen!!

Great idea, I hope it can come to fruition. Bob Woods is an iconic soap star, and I am sure he would be great as Castle’s Dad. It is so incredibly kind of Nathan Fillian to remember his roots and those that helped him get his wings and move on, this only shows what a great man he is, and a fine actor as well. My family adores Castle and to see Bob Woods on there would be super.

I agree 100% as well. I think Nathan Fillion is a cool guy!
It is wonderful to remember his early soap role on OLTL and to think of Bob Woods.
I was very fortunate enough to spend some quality time with Bob on August 13,2011.
I went to the OLTL Fan weekend and we hung out.
Bob is really awesome,fun,generous and considerate guy to hang out with.
He would be fabulous as Castle’s Dad!
Have a great Day!

Robert S. Woods would be terrific as Castle’s dad.

Wish it would happen Robert Woods would be a great addition to the cast . Have been a onelife fan , and am a Castle fan,and would like some of the actorson one life to find new life on prime time. or else where.