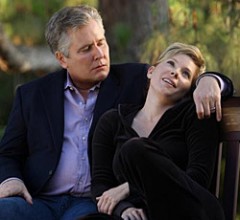 The Last Chance for Romance Special has these episodes on tap for you!

5 p.m. – AMC Episode #1980-02768 (Original Air Date 9/3/80) – Cliff and Nina are married in a fairy tale wedding. Also: Pregnant with Cliff’s baby, Sybil is not happy about his marriage to Nina; Tom and Erica fight when she has to attend a business dinner on their anniversary.

7 p.m. – AMC Episode #1993-05997 (Original Air Date 3/4/93) – When Tad finally convinces Dixie he’s alive and on the other side of the door, the two are joyfully reunited. Also: Hayley and Charlie find Brian and Junior on the run; Opal and Palmer are reunited with Junior.

8 p.m. – AMC  Episode #2001-08064 (Original Air Date 4/9/01) – Ryan and Gillian share a romantic wedding filled with surprises. Also: Leo and Greenlee have a last minute change in plans when he remembers he has the wedding rings; while on the witness stand, David admits his guilt about the drugs to Dixie.

9 p.m. – AMC Episode #2002-08387 (Original Air Date 7/15/02) – Leo and Greenlee are married in an intimate wedding in the boathouse. Also: Anna and David debate whether to tell Greenlee that her father’s been shot; Tad and Brooke try to find Maria.

Let us know which is your favorite? And, what favorite duo’s episode you would wish was in this line-up! Enjoy the Marathon!

Nathan Fillion reveals he would like OLTL's Bob Woods to play Castle's dad!

My FAVORITE wedding is the one I missed the very FIRST one Cliff and Nina. Nina had on the MOST BEATIFUL wedding dress! I wish I could see the first episode again!

Soapnet just started airing Veronica Mars as well as Brothers & Series. I still get Soapnet where I live although I also get Disney Jr in another channel.

I think that Soapnet will continue to live on for many months or even years in some parts of the country. They wouldn’t be buying new shows to air on the network if it was going off entirely.

Soapnet, while not perfect, is a great channel.Soapnet’s evil twin, ABC, could learn one or two things from Soapnet.