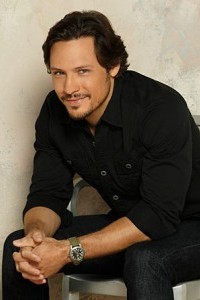 Holy Moly! This season on Revenge the writers have put in so many twists, but this one set the stage for new dynamics and conflict as the story continues from here, especially for Jack Porter as played by Nick Wechsler!  On last week’s episode,  Stevie (Gail O’Grady), Conrad Grayson’s ex-wife (Henry Czerny), revealed herself to be Jack’s mother!

So what happened when Nick Wechsler found out the story plot point? Well, according to E Online Wechsler said, “My first reaction was sort of like, ‘Wow, this is an incestuous little group! We’re all interwoven in each others lives in some crazy way. ‘ (Laughs)  So when they mentioned that at first, I was like, ‘Oh s–t, really?’ And then once they told me, I was like ‘OK, now I see why we’re doing it, it’s pretty smart.'”

As for Jack’s new found connection  with the Grayson family, who killed his wife Amanda and his brother Declan, Wechsler admits it will help set the stage for Jack and Emily (Emily VanCamp) to actually reconnect! “I think this sort of helps him understand why Emily was doing what she was doing.  His wife was killed, and his brother was killed by the same family that f–ked her over.  Jack wants back in, if for no other reason than to protect Emily and those he loves, but I think he might sort of want to find his way back into the fight with the Graysons.”

As for the upcoming season finale, there is hope for Jack and Emily fans!  Nick revealed, “The ideas planted in this finale are awesome.  I’m also excited for people to see Jack and Emily—we find a way for their feelings to blossom again. An opportunity for them is created.”

So, what did you think of the bombshell that was bestowed on Jack by mama Stevie?  Do you hope that Jack and Emily get back together?  Let us know!  And don’t miss an all-new episode of Revenge starting at 10PMEST/9PMCST tonight on ABC!

GENERAL HOSPITAL: Lulu To Britt, "You Are One Wedding Ceremony Away From Being My Sister-In-Law!"

I, for one, would love to see Emily and Jack find their way back to each other. My patience is strong so I’ll sit back and enjoy the ride while I wait for that day.

Lovin Revenge..
I think Jack and Emily will be end game..
It is highly exciting!!
Emily and her head trauma is becoming exciting never know what she will do next!! I adore Nolan..
It is near an even up between Revenge and Scandal both are awesome!

Scandal is higher drama and way more intense and intriguing than Revenge but Revenge is more soapy! 🙂

I’m guessing that Jack is actually Conrad’s son (Conrad never knew Stevie was pregnant when she left so she gave the baby to the Porters to raise to keep Conrad from corrupting him).

I thought that, too, Alan!

I have been telling Revenge fans that too! I think either Stevie knew and let the Porters believe Jack is theirs OR she didn’t know and thought it was the Porter’s.

So I assume Declan has a different mother because if she were around, Jack would have been old enough to remember her. Did we already know that the brothers had different mothers?