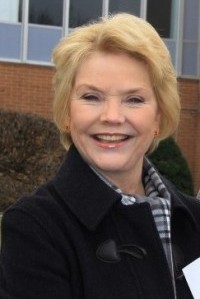 On Friday, One Life to Live’s six-time Daytime Emmy-winning star, Erika Slezak (Viki) celebrated her 70th birthday, and she had quite the surprise awaiting her on this special day!

If you follow former Another Word and OLTL star (Yes! She was on AMC and GH, too), Linda Dano on Twitter, you saw that the ever-creative Dano was documenting the day’s adventure …. on her way to meet Erika and surprise her for her birthday!

Dano, along with whomever was filming these video gems, captured the moments when Erika was greeted first by Linda, then by Anna Holbrook (Ex-AW, OLTL), Loyita Chapel (Ex-OLTL), and then Loyita’s husband, the one and only Bob Woods (Ex-Bo, OLTL)!

Erika’s reactions are priceless and sweet, and we have to thank Linda for sharing this with One Life and soap fans around the twitterverse.

Watch the videos after the jump of Linda, Bob, and more greeting Erika on her birthday.  Then send your bday well-wishes to Erika in the comment section below.

Omg is that Loyita Woods where is her Bo pic.twitter.com/3UynAmA83f

Three Villains Return To DAYS As The New Season Kicks-Off After The Summer Olympic Break!

Happy birthday Erika!! I miss you and Viki so much.

Happy Birthday to Erika! So good to see her and all her cronies looking well. I miss the OLTL family! God Bless to all.

Love it! Everyone looks beautiful and happy. Robert S. Woods looks so good with a beard! Thanks for posting. I miss my 2nd family very much. When I can’t see them every day, it’s just really nice to know they are chugging along and to see their lovely faces now and again.

Happy Birthday Erika !
So good to see you again.
And some of your former costars as well – you are so missed on screen. <3

What a cool thing to do! One of the many, many reasons why OLTL and its cast were so special!

Happy Birthday! U are so missed on our screens!

Oh how I missed these people and my beloved #oltl

wishing a happy belated birthday to an icon of an actress erika… you look amazing as well as everyone else that celebrated with you. missing you all!!!!!

Happy Birthday Erika! I loved you on OLTL and hope you are doing well.

I’m crying!! Love these people! They all look very happy. Me: I’m missing One Life to Live everyday.

Same here. I just found this gem. I often think of my old friends from OLTL. Shame shame ABC.

Happy Birthday! Looks like a fun day for you!! I enjoyed it – thank you & happy day!

Oh my goodness… The best cast ever, the greatest actress ever. Miss the show. Happy Birthday beautiful Erika.

Happy Birthday Erika (Vicki)! Miss getting to see you and all the OLTL cast 5 days a week! So good to see you are well and happy!

Happy, Happy Birthday Erika!!!!! 🙂 I love and I miss you and OLTL soooooooo much!!! I hope that you have a fabulous day!!! 🙂

Happy Birthday Erica ! And hello everybody ! I miss you guys !

So glad to see u ! In her best billy crystal voice—u look marvelous!

What a wonderful treat to see everyone looking so well. Very happy birthday Erika!!!!!!!! I miss you and everyone else from our beloved One Life to Live everyday.

Happy Birthday Erika you are so missed!!

Happy Birthday Erika! You look beautiful as always! It was great seeing everyone, thanks for sharing Linda Dano! I miss One Life To Live so much, it was my daily treat and I loved it!

Happy birthday to you and looking at everyone from OLTL is certainly a treat. Thank you Linda Dani for sharing this with us.

That is so cool, if I was there with those OLTL and AW stars I would have died! So cool seeing them all get together, that is really great!

Anna Holbrook! She was amazing as Sharlene on AW, her and John were perfect as the hippie types from the 60’s all grown up. She was so talented that I’m surprised another soap didn’t grab her, but I think she did a lot of prime time shows.

Happy B’day Erika! Loved you in everything you’ve been in & of course OLTL. Sure wish we could get you on #GH as Monica or Tracy’s college roommate. Best wishes

Erika of course I’m going to wish you a VERY HAPPY BDAY FROM A FAN WITH THANKS AND LOVE FOR DECADES OF GREAT DAYTIME.

Lovely lady miss her on the soaps but their is not one that is airing today that I would want her in terrible writers !

Please Frank give her a great reccuring role on GH.

Happy Birthday , miss u on TV wish we could see u on the TV again .

Happy Birthday, Erika. Wishing every happiness and good health. Would you consider a guest appearance for a few weeks (or forever) on GH? What about nighttime? Anyway, i hope life is wonderful for you. I miss seeing you.

Happy Birthday Erika! You are the greatest actress to ever grace daytime television.

Happy Birthday, to the lovely and talented Erika Slesac!!

Happy Birthday to Erika Slezak who made Vicki (and all her other personas) come to life for so many years. You provided endless hours of escapism…Vicki was heart and home in the show and on the screen. Bob Woods? You are the essence of likeability and charm. If you still have the desire to work in daytime, hope you both wind up someday soon in Port Charles. 🙂

Happy Birthday to one very classy lady surrounded by a bunch of classy friends. Love to them all.

Hope she had a wonderful birthday! After watching OLTL for over 30 yrs, it was like she was a 2nd mom, except with GOOD advice (except when she was Niki… or Tommy…)!

Happy Birthday, Erika–miss all those actors and their characters so very much!

Happy Birthday, Erika! I miss this bunch so much, but I am watching old OLTL episodes and loving that! Have a great year!

I still remember the first scene I saw of Viki- it was 1971 during the Steve Burke/Marcy Wade arc- Erica Slezak was 26 years old!

Happy belated to Ms. Slezak! It looks like an awesome time, and Ms. Dano appears to be a very cool friend! Best wishes for many more celebrations!

What a treat. It is 12/29/16. I just googled Ericka’s name. I often think of her and wishing she is having a wonderful life. But deep down I want her back on one of the remaining soaps. I adore her so. It is wonderful to see Bob and his wife and Linda Dano too. My favorite soap was OLTL. I still have not forgiven ABC for the AMC/OLTL cancellation. Linda thanks for doing this for us fans out here.