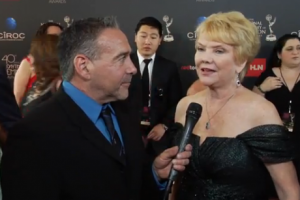 One Life to Live’s Erika Slezak (Viki) is a six-time Daytime Emmy winner! And at last night’s 40th annual Daytime Emmy Awards, the soap legend presented the Outstanding Drama Series award, which was is the most prestigious and last award of the night, and as well now know that was bestowed by Erika to Days of our Lives!

Prior to her role as a presenter on the Emmy telecast, Erika chatted with Michael Fairman, who asked her of all the six Daytime Emmy wins, which was her most memorable?   You will find out, and with a very touching moment from Erika too.

In addition, Erika recalls being given the monologue about what soap operas mean to its viewers, which was part of the second to last episode of ABC’s One Life to Live. which earned the show Writing and Drama Series nominations last night.

Finally, Erika weighs-in on her thoughts on Prospect Park and the labor union being able to resolve the issues so that One Life can go back to production as scheduled in August.

Watch it after the jump, and let us know what your favorite Emmy win of Erika’s was? For more 40th Annual Daytime Emmy Red Carpet video interview with TOLN stars from All My Children and One Life to Live, click here!

THE TALK's Aisha Tyler Steals The Show With Envelope Mishap at Daytime Emmys!

Days of our Lives Wins Outstanding Drama Series For First Time in 38 Years! Share Your Thoughts!

Erika represents pure class, sophistication and inspiration. Such a joy to see her interviewed!

I totally agree with you!!!

Love her dress… she looks so beautiful!!! Love her… she is one of the greatest ever!!! Great interview Michael and Erka!!!

Bravo Erika as always. She is so honest and classy and so committed to her show and her profession. It is always a joy to see and hear her.

Erika has alway’s been my all-time favorite on OLTL ! She is the heart & soul of OLTL. Without her it wouldn’t be OLTL plus I think the soap couldn’t go on if she weren’t there.

Always love to see the positive!

Erika Slezak is the best! She is a treasure..

On another note – it looks like they fixed the doors on OLTL.

They now open IN to Tea’s house – will be watching at La Buleigh.

Didn’t they have a tribute to AMC on last year’s show? Why wasn’t there anything for OLTL on this show? They would’ve had plenty of time if they had cut out that horrible singing! And Carrie Fisher was a waste of time too! They messed up the tribute to Monty Hall and they still went overtime!

As usual, Erika is the epitome of grace and class. Her father would be proud (is proud from heaven!). Love her positive outlook and her loyalty to Robin Strasser. My favorite emmy win for Erika will be NEXT YEAR! 😉

GREAT interview!! Ms. Slezak looks amazing, and the questions were spot on! Thanks, Michael!

That was a terrific interview. She was one of the few presenters who appeared to know what they were doing on the Emmy Award show. She is my favorite on OLTL. I feel better about the future of OLTL and that the labor dispute will be resolved after listening to her interview.

The reason she knows what she is doing is because she has been in the business and loves daytime. I wish that ABC would do the right thing and bring them back home I applaud PP for what they have done but it is still not the same. Erika did look lovely!

Great interview with the Fabulous Erika Slezak!! She is such a classy lady and a Wonderful actress! Hope they get everything together so OLTL can start filming again! Look forward to more of it and Erika!!