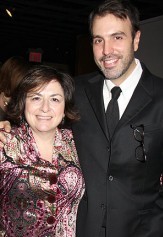 In a new interview with On-Air On-Soaps, One Life to Live’s head writer, Ron Carlivati speaks to the addition of current As the World Turns head writer, and former OLTL scribe, Jean Passanante, who is heading back to the Llanview writing team later this summer.  When word was announced of Jean’s  new position as Associate Writer at One Life, fans and pundits felt it may have signaled the end for Carlivati.  Not so.  Ron addressed the decision to bring Jean on board.

Carlivati stated, “We had room in our writing team.  I had worked with her before, and so I reached out for Jean to come onto our writing team.  I think it blew up into what her role would be. It was she who hired me at One Life to Live.  I am thrilled.  Jean is a fantastic person and a fantastic writer.  She gave me my first job, and it was she who hired me at One Life to Live. I have wanted to work with her ever since she left One Life to Live, and it never quite worked out.  And unfortunately, I am working with her because As the World Turns is going off the air, but I am thrilled she is coming on.  She is incredibly intelligent, and has a great sense of story that is well balanced.  There is comedy and romance, and she can balance all those elements and she has a really good sense of character.  She creates wonderful characters, and she sees the strengths and weaknesses of a character.  A lot of what you saw going back to the classic Todd/Marty story had to do with Jean!”

Also addressed with Ron was if there was a new style or direction coming to One Life to Live on the horizon. The head writer offered up this statement. ” To me, our show is always changing and evolving.  I think that is the nature of a soap opera.  At the heart of it, it will always be the same core characters and the same core values. To that extent, we are bringing in some new fun people and our stories are shifting around and changing, but I think that is what we always do.”

Make sure to read the entire interview with Ron, and a seperate feature with Kristen Alderson as part of the three-day musical event, Starr X’d Lovers playing out on One Life to Live through Tuesday, May 18th.

actually, I think a lot of viewers would like to see some old people come back on… namely Kish.

I totally agree, md1347. They are such a popular couple and both Scott Evans and Brett Claywell could be great at doing comedy as well as drama (especially raising a new baby). I honestly can’t understand why FV and RC cannot see the appeal this couple has both nationally and worldwide. No other couple in daytime has ever achieved the popularity they did in such a short time, and especially both nationally AND internationally. I would think the sponsors of the show would LOVE having them back as their products are sold and used in foreign countries the same as… Read more »

I agree with md1347, bring back “Kish”, even if it’s only in the way we see Marcie and Michael.. a few updates every couple of months would be good. Also, we could see Gigi visitng the baby once and awhile.

Yes, bring back Kish and I will never miss an episode ever again! Scott and Brett were such a special part of the show and they were super talented and the show is just not the same without them.

When is One Life To Live gonna start filming in Hi-Def?