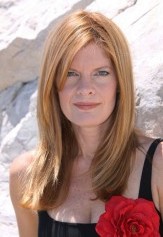 One of daytime’s most powerful actresses, and already a two-time Daytime Emmy Award winner, picked up another nomination this past Wednesday for Outstanding Lead Actress in a Drama Series.   We can only be talking about Y&R’s Michelle Stafford (Phyllis).  On-Air On-Soaps caught up with Michelle on Emmy nomination day to get her thoughts on her competition, the meaning of the recognition by her peers, and what she submitted that got her into the final five. Here is what Michelle had to say!

Michelle on how she found out she was nominated, and what it means to be a nominee: “Our head writer, Maria Bell called me at 5:50am.  And, I did know the nominations were coming out today. In the past, every year that I submit myself,  I try not to know when the nominations are coming out, because I don’t want to be stuck to it.  Every year I do that somebody the night before usually tells me, “Hey, tomorrow the nominations are coming out.” And then I go, “Oh, God! OK, great. Now I know.”  So this year I was like, “I am going to find out when they are being announced ahead of time (Laughs), and this year, nobody the day before even talked about the nominations which I thought was totally hilarious!   It’s so great to be recognized.   I don’t know anyone who takes getting a nomination lightly.  You should be out, if you are going to be so jaded and take it lightly.  But if you are going to play, then you are going to play to win, and you don’t always win, but you are going in to play the game.”

Michelle on what episode she submitted that got her the Lead Actress nomination: “The show I submitted was Phyllis is trying to hold on to her marriage, and hold on to her life, and she knows she is going down.  She finds out that her husband’s ex- wife is pregnant possibly with his child.  And it just keeps getting worse and worse, and she knows she is losing. There is something about the reel that I liked, and that is that Phyllis just kept on coming back. She is trying to make it work, and then Nick says something to piss her off.  There is desperation about it that I thought was interesting.  I guess some others did, too (Laughs).”

Michelle on her fellow nominees in her category: Crystal Chappell, Maura West, Bobbie Eakes and Sarah Brown!  “Well, I texted Crystal, I texted Maura, I tweeted Sarah Brown, and I face booked Bobbie.   So, thank God for new communications.  It’s a great group every year, and there is never a bad one in the bunch.   However, it seems like every year I am nominated, I am nominated with Maura and Crystal! (Laughs)

Michelle on being nominated with the Y&R collective acting group of  Peter Bergman, Doug Davidson, and Billy  Miller – all of whom On-Air On-Soaps said to Michelle were  “her buds” :  “Well not Billy! Let’s not go that far.” (Laughs)

Michelle on how she celebrated the news:  “Well, every year Christian LeBlanc (Michael) and I, whether one of us is nominated or both of us are nominated, we get together to celebrate ourselves.  So, last year I went with him to celebrate him, and this year he went with me today to celebrate me.”

Michelle on the storyline this past year with Sharon/Nick/Phyllis that earned her a nomination:  “The one thing I will say is: last year I worked really hard on this storyline. It was sort of written for me to be a shrew at times, for Phyllis to be the bad one.  I had to bring a human quality to it because it was so shocking to her what was happening. You write these triangles and somebody has to be wrong. In the scripts I received, many times, if I played it screaming at Nick in his face, who is going to understand that? As a storyteller, I had to view it as that I am telling a story of this woman’s condition right now. The story I wanted to tell was how this woman was feeling.  It was hard from October through May.  I was crying and tormented over the dissolution of my marriage, and that is a long time to play that.  And, as I was going through the episodes to choose for the Emmy competition, I saw that actually, Nick ended his marriage to Phyllis six times!  There were six break-up scenes! Even Maria when they were looking through episodes said, “Oh, my God. I didn’t even realize…we shouldn’t do that anymore.”  (Laughs) I worked hard to mold and create empathy for what this woman is feeling and that was fun.”

Make sure to read many Emmy nominee exclusive reactions on our special Daytime Emmy Nominations page !

One Life's Ron Carlivati on Passanante return and "new fun people" coming to the canvas!

Congratuations to all the Y& R nominees but, Michael did you for get that Christel Khalil was also a Y&R emmy nominee?

Hey Anny: Not at all. I Know Christel is up. The reason I did not bring her name up during the interview with Michelle was Christel does not have hardly any scenes with Michelle on the show. There stories do not mix. So therefore she is not one of the people she performs with often. It was meant as no slight to Christel. Hope this makes sense.

Congratulations Michelle, You really really are a remarkable actress and such a lovely person, and that’s why you are my favourite soap actress EVER!! No other actress has ever made me feel every single emotion onscreen like you have. Trust me on this one, I was in as much agony watching Phyllis being dragged through the mud for almost an entire year…many times I felt like I wanted to jump into the TV, get a crappy old car (because Phyllis doesn’t do that anymore LOL) and drive over Nick and Sharon 100 times until you couldn’t tell the asphalt from… Read more »

I was surprised that Stacy Haiduk was not nominated. Playing two characters (Patty & Emily) at the same time is not an easy task. Stacy has done some really difficult scenes, portraying a mentally ill person, etc. Michelle is a good actress, but nothing comparable to Stacy’s performances this past year. In my opinion, Stacy should have been the nominee, which she well deserved.

Christel Khalil’s nomination is a real mystery. I see no exceptional talent with her or the character she portrays. In my opinion, she is quite boring.

I know I will be watching as my favourite actress is up for the Emmy. Congratulations to Michelle for her excellent work in a year when so much of the material was not written from her character’s point of view. Thank your for highlighting the vulnerbility and the grace of Phyllis on a daily basis.

He left Phyllis 6 times? Wow! That’s much. Time for him to fight for her