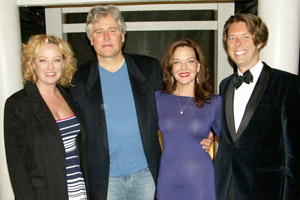 Michael E. Knight (Tad, All My Children) and Robin Riker (Beth, The Bold and the Beautiful) appear in the new play The Cost of the Erection currently running at The Blank Theatre in Hollywood, California.   On opening night, several notables came to see the performances including Blank Theatre board members, Virginia Madsen and Vanessa Williams!

The play directed by Daniel Henning and written by Jon Marans is a fabulous four person study of two relationships both personally and professionally.  If you are in the Southern California area and want tickets to the show, you can call the theatre ticket line at 323-661-9827.

Now on to some news that many soapers have asked inquired about.  On-Air On-Soaps ran a contest for the last several weeks for one lucky fan to win a “Meet and Greet” with Michael E. Knight and tickets to The Cost of the Erection.   We have identified the winner!  She is Rebecca Poertner from Missouri! And she and her husband will be making their way to Los Angeles to see the show and to meet Michael in the coming weeks!

For those who have asked what the correct answers were to our trivia contest, “So You Think You Know Michael Knight” here are the questions with the correct responses below.

1) How many Daytime Emmys has Michael Knight won?   Three

2) What was the full name of Tad’s doppelganger when Michael returned to AMC in 1992?  Ted Orsini

3) What is the name of Tad’s child with Brooke? James “Jamie” Edward Martin

4) Who did Edna Thornton pay Tad the Cad to date because she was overweight and unhappy?  Dottie Thornton

5) What are the two things in common between Michael E. Knight and David Hasselhoff? They were both married to Catherine Hickland, and the name Michael Knight was the name of David Hasselhoff’s character in Knight Rider.

7) What famous theatre in New York City did Michael get his acting training at?   Circle in the Square

8.  In an interview with On-Air On-Soaps at the end of his run at AMC, who was Michael talking about when he said, “She had this kind of fierce loyalty to her children.  I remember doing scenes with her where Tad was weighing being a Martin, and that woman would be there with tears in her eyes. When I found out she was gone there was a part of me that said, “Maybe it is an end of an era.  Maybe it is time for me to walk away from this?”   Mary Fickett

9) What was the correct full birth name of Tad Martin?  Thaddeus James Gardner

10) Was Tad ever an employee of Opal’s Glamorama? Yes, or No?  Yes, he worked at the Glamorama

Thanks to everyone for entering! Congrats to Rebecca who is very excited to meet Michael! She has watched AMC for 40 of its 41 years!

Bren Foster OUT at DAYS! Schuyler Yancy IN as Celeste's Son!

Jen Lilley reveals on Twitter she is staying on as GH's Maxie & to stop the hate towards her from fans!

good for her ,I like hearing she is a 40 year all my children fan.

I miss Michael E. Knight as Tad Martin on my beloved All My Children.

Tad the Cad, keep it moving and going forward. Miss you.