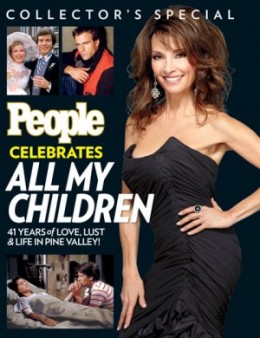 PEOPLE magazine, the world’s most popular celebrity weekly, announces the release of PEOPLE Celebrates All My Children, a collector’s special that chronicles the iconic soap opera, which ends its 41-year-run on daytime television this month. The 128-page commemorative soft cover book, which hits newsstands on September 9th ($11.99/US), is rich with dozens of brand new exclusive photos and interviews, insights from Emmy award-winning actress Susan Lucci and creator Agnes Nixon, and stories of the memorable scenes, favorite moments, crazy characters, groundbreaking plots, and legendary stars that made this show an American institution for four decades.

PEOPLE Celebrates All My Children takes a look at the woman behind Erica Kane, with a decade-by-decade profile of Susan Lucci – the actress who made her mark playing the most notorious vixen (with eight husbands!) in soapdom.

“I loved Erica Kane from the moment I read my first audition scene, and I will always love her,” Lucci tells PEOPLE. “She made me feel like I can fly.” She adds, “The show always had a mandate to inform as well as entertain. The story lines about drug addiction and gay teens…it was groundbreaking.”

PEOPLE Celebrates All My Children checks in on the actors who played the show’s favorite characters, such as Adam Chandler, Brooke English, and the first Opal Gardner. It also provides an all-access pass to the set including behind-the-scenes photos of the stars getting their makeup done and Susan Lucci lounging in her dressing room. There’s a rundown of AMC hunks throughout the decades featuring Josh Duhamel, Mark Consuelos, Aiden Turner, Keith Hamilton Cobb, and Cameron Mathison. A Pine Valley wedding album of the show’s most memorable nuptials is also included, from Cliff and Nina’s over-the-top extravaganza to Edmund and Maria’s luxe, winter-wonderland event to Bianca’s historic day.

What do Mary-Kate and Ashley Olsen, Elizabeth Taylor, Carol Burnett, and the New Orleans Saints all have in common? They were all big AMC fans who got the chance to appear on their favorite soap, and their celebrity cameos are featured in PEOPLE Celebrates All My Children. Stars like Melissa Leo, Sarah Michelle Gellar, Amanda Seyfried and Jesse McCartney, who all got their starts in Pine Valley before moving on to work on the big screen and in prime time, are also featured. And PEOPLE Celebrates All My Children also pays tribute to the AMC stars that have passed on, including Ruth Warrick (Phoebe Wallingford), Frances Heflin (Mona Kane Tyler), and James Mitchell (Palmer Cortlandt).

The hardcover version of PEOPLE Celebrates All My Children is available beginning September 27th ($19.95/US) wherever books are sold and can be ordered online at www.PEOPLE.com/allmychildren.

So soapers, will this be on your must-have memorobilia for all things Pine Valley? Let us know!

Sounds like it will be a wonderful tribute to such deserving actors! I can’t wait to get my copy and one as a gift for my aunt who is also a long-time fan. I hope this issue also pays tribute to the crew as well, for without THEIR talents, the show wouldn’t have maintained the quality it has for so many years!
Hats off to All My Children!! From the bottom of my heart…Thank you for “being there for me”!
(Oh, and I WILL be watching when AMC moves on-line!! See everyone there!)

I really love this idea and can’t wait to get the hardcover! 🙂

just reading this brings tears to my eyes – i have already pre-ordered the hard copy & can not wait to get it…………..

I got ours today at wal-mart,,,, Its a great book,41 years of AMC,actors from some of the other soaps are in there too,