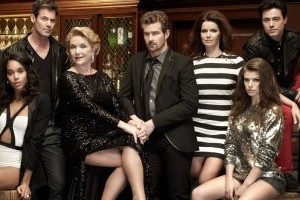 Fantastic news All My Children, One Life to Live and soap fans!  Prospect Park’s wunderkinds, Jeff Kwatinetz and Rich Frank were named this morning to highly respected industry daily newsletter Cynopsis:  Most Intriguing People in Broadcast, Syndication and Production of 2013 honors list!

Cynopsis related on their picks:  “We now turn our attention to the minds driving the on-air content and shows that have changed the way people view appointment television. Our list was selected by the media industry and by Cynopsis staff, and offers a glimpse into the personalities in broadcast, cable and digital who made headlines throughout the industry. Our slate of honorees may have produced a hit series, developed a coveted lineup, overcome a difficult challenge or managed a big deal. All are leaving their mark.  Congratulations to our honorees and we look forward to seeing what they have in store for the years ahead!”

So soapers, what do you think of Jeff and Rich making the list?  Does it spell exciting times ahead for groundbreaking soap opera programming?  Weigh-in!

One Life to Live Fan Rally Video! – The Stars Came Out To Greet The Faithfuls!

I think it’s fantastic that others are taking notice of the work they are doing at Prospect Park. And I am VERY excited to watch two of my favorite shows again!

They all deserved it!

Great news about the PP execs – sort of on the same topic: Have you heard anything official regarding the fate of Michael Easton and/or Kristen Alderson? I have heard Roger Howarth is being allowed to do both GH & OLTL; am wondering why the same cannot be so for the other 2. Many, many fans would love some information on this!

So far Roger Howarth the person is under contract with ABC and the Todd character is Prospect Parks.. lol
I do not believe that RH has signed a contract with PP; they only leased the character Todd, not the actor RH.

Can’t wait to see how this mess turns out..
None of the actors have to go on with PP, only the characters that could be recast..

Roger Howarth is going to be on OLTL for a few weeks and then go back to GH. He has signed a contract with Prospect Park.

It’s simple. RH agreed to go and the other two havent so far.

From start to finish, I think the job they’re doing is PHENOMINAL. I could not be more proud to support PP new venture bringing our beloved soaps online. Good luck guys!

Jeff and Frank are visionaries and deserve the prestige. Like Cady (AMC) and Kelly (OLTL) said, “Bring it on!” Prospect Park is going to take “Soaps” into a new era.

Congratulations Jeff and Frank on your innovative work bringing OLTL and AMC back to life. The fans of both shows are thrilled to watch on April 29th. Thank you so much.

Can you get that in ABC’s Executive offices.Personnally to Iger and Sweeney….LOL

And mail a copy to Brian Frons.

Do they even get mail were he belongs? LOL

I think it is wonderful that soaps are coming online. I remember back in 2009 when Crystal Chappell first tweeted that she was pitching to the networks that online was the future of soaps. I would have liked to have seen her be included on this list because Open Book Productions has been doing it with Venice the Series and now Grove the Series since 2009.

I am thankful that soaps have found a home online. I have been hooked to Open Book Production’s Venice the Series for all three seasons now and am looking forward to season 4. It has been a wonderful way for this Guiding Light fan to see some of my favorite actors and actresses from that show perpetuate online. I have also enjoyed seeing actors from other shows in different roles than they play on tv. I think it is great that Prospect Park is also bringing AMC and OLTL online, but I have to give credit to Open Book Productions… Read more »

Congrats to PP on their new accomplishments.

We should also acknowledge Crystal Chappell and Open Book Productions. They have been pioneering soap to the web since 2009. Venice The Series is currently in production of it’s fourth season after three very successful seasons and an emmy winning 2nd season. The Grove The Series just debutted in January 2013 and already has over 108K views.

I agree!! These types of lists only seem to back people with money behind their projects. Can’t believe Two and a Half Men made this list.

I congratulate Jeff and Frank. They accomplished a great thing It is wonderful for those of us who love soaps..Any talk of online soaps needs to include the name Crystal Chappell.A huge debt of gratitude is owed to Crystal and her Open Book Productions who really lead the movement of soaps online back in 2009 with Venice. That show is going strong and Open Book has also created The Grove which premiered Jan.,2013 and can be seen on YouTube. Venice is currently shooting its 4th season.

I so love that our loved soaps now can be watched online, I so wish for Procter and Gamble to release the rights to Guiding Light. Crystal Chappell is a pioneer on web soaps she has been doing this beautifully since 2009 with Venice The Series and recently with The Grove The Series so sad that her name was not mentioned in this article.

glad for PP but please let the GH3 come back to general hospital . Michael Easton, Roger Howarth and Kristen Alderson now belong on general hospital. Holding them hostage is wrong. that is not the way to get people to watch your show. I will not be watching as long as you are holding them hostage. enough all ready. sharing them with General Hospital is not a good idea how can you develop story lines with them going back and forth. why would you except them to fly back and forth from the west coast to the east coast not… Read more »

If you watch GH it was very contrived today. Starr has been called back to Llanview, John and Sam decided they are better off staying friends, and Carly told Todd though she loved him, please leave as we will only hurt each other. I heard RH will do both- at least for a while. But there is something in the legal aspect that they can’t be on both on the same day. I personally liked john better on OLTL, but I love Starr and todd on GH. I say get Trevor back on OLTL and have Todd stay in Port… Read more »

This is very impressive! The whole Soap Revival Revolution is a winner! Prospect Park, the FANS, the most AMAZING soap-saving groups & their leaders…We’ve come full circle… like, Love and Marriage…Can’t have one without the other!!!

Just want to say a big Thank You MICHAEL FAIRMAN for all your help with the SOAPS:)

It’s so humbling for Mr. Kwantinetz and Mr. Frank to be included on that kind of list, so, yes, it does scream exciting times for creating soap opera programming.:)