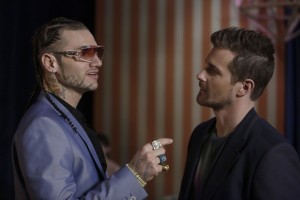 Looks Like One Life to Live’s Josh Kelly (Cutter) is getting to hang out with a bunch of acts from the music biz whenever he is on set in Llanview!  Today, entertainer and rapper RiFF RaFF stopped by the set in Stamford, CT for a special cameo appearance on the upcoming revival of the series!

For those who don’t know, or need a reminder, RiFF RaFF is one of the music industry hottest rappers. Since being a contestant on MT’s s reality show G’s To Gents,  RiFF RaFF quickly made a lasting impression on viewers with his extravagant wardrobe and tattoos.   Since 2010, the singer has released numerous music videos. The popular performer has released three albums and in February of 2013.  RiFF RaFF is signed to super producer Diplo’s Mad Decent label and will release the Neon Icon album featuring Wiz Khalifa, YG, Snoop Dogg (aka Snoop Lion) and Mike Posner.

Rapper and reality star RiFF RaFF first gained notoriety in late 2008, releasing songs, freestyle-videos, and sketch clips, which showcased his talent, slapstick and performance art. In 2009 he caused a buzz on MTV’s reality show From G’s to Gents with his extravagant way of dressing and the MTV logo tattooed on his neck. The Houston native increased his internet fame by releasing well-produced music videos, which generated more than 1 million YouTube views in less than two months.

So soapers, what do you think about RIFF RaFF making a visit to One Life?  Will Llanview continue to be the place where up and coming and hit recording and music acts like to come and hang out?  Weigh-in!

I think the reason why Josh Kelly (Cutter) is meeting so many music acts on set is because his character now manages Blair’s new nightclub Shelter, according to what Kassie DePaiva (Blair) tweeted to me on her twitter account!

Why would Blair hire Cutter to work at Shelter after his and Aubreys unforgivable plot against Joey and Blairs cousin Kelly?

Well, Blair was once a gold digger herself like Cutter was, so I guess she believes in giving people like him second chances in life!

Blair also hired Aubrey to work as a bartender at Capricorn, too!

I seem to forget Blair was never a saint herself…im usually more aware of stuff like that…thanks 4 the reply!

Blair hired Aubrey to work at Capricorn last year. And their plot wasn’t so much against Kelly as it was against the Bukes. And Blair’s no saint herself, she’s not the type to judge others.

I 4got Aubrey worked at Capicorn, and i just finished rewatching OLTLs final year on tape not too long ago. Thanks 4 the reply!

Well, considering that Prospect Parks business is promoting/producing music/rock stars, and is in with UMA I can see that there will be good talent/singers/rock stars, on both soaps..
PP will get money off the downloading of the tunes and the promoting of the Rockers on showcasing them on the soaps..

That was their plan the first time around..

OLTL is going to be unreal with these great changes!

Do we need male model Josh Kelly on the show at all???

soaps should never ever lack for male models.

I can watch my Corbin Fisher and Randy Blue DVDs for that kind of gratification, though.

I want strong, compelling actors on my soaps. Not brain dead himbos.

I do not have Facebook so my kids and their friends are keeping us vet:-) viewers up to date on the musical talents and us vets keep them informed on the history of the show:-). Win-win because all are excited and the kids are getting others kids to watch which is good because I just want my beloved OLTL to be successful so bring on the musical talent but keep it balanced for a true win- win. 4-29-13….I have saved the date.

Riff Raff’s characters last name is Franko he works in the art world, and he may be on the shady side. Hmm, sounds awfully familiar.

It is perfect time to make some plans for the future and it’s time to be happy. I have read this put up and if I may I wish to suggest you some attention-grabbing things or advice. Perhaps you can write next articles relating to this article. I want to read even more issues about it!