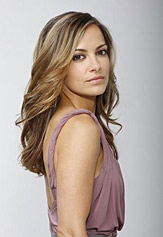 Rebecca Budig (Greenlee) discussed her feelings on the emotional ending of All My Children on network television to TVLine.com and she addressed some of the mystery surrounding the final cliffhanger.  It seems as we suspected that image we all saw of Josh Duhamel as Leo, standing in a door way in a suit was intended for the finale before the show was migrating online via Prospect Park!

The actress also reveals how Greenlee lost her fire along the way, and where she is with the Prospect Park negotiations, since originally fans were hearing she was ready to sign-on!  Here are some excerpts from the interview below!

Budig on Josh Duhamel as Leo coming back at the end: “Oh, you know, they shot something with Josh when he was here in August. I think they were going to use that in the finale before All My Children was purchased by Prospect. Now don’t hold me to it, but I do believe that was the intention when the show was going to end one way. But it’s been changed now.”

Budig on the final cliffhanger decision: “I have to say I don’t really know the particulars, I just know that they were going to tie loose ends up. That was the original intention, but when the show was bought by Prospect Park, they decided to go in a completely different direction.  Everyone is left on a cliffhanger, including people like Debbi Morgan (Angie) who will no longer be with the show after Friday’s finale.”

So would you have liked to have seen Leo come to the Chandler party at the very end on yesterday’s cliffhanger? We would have!

Grab Your Hankies: Watch the behind-the-scenes ending of AMC on segment of "The View"!

It’s a shame that the Prospect Park purchase cheated Leo fans out of a happy ending.

Amen!! I feel we got cheated out of Babe, Gillian and Leo’s return, because of the finale change due to the PP deal. I mean, who is this woman that David just refuses to tell everyone that he’s keeping under his care? They could have at least given us this one. I understand the need for a cliffhanger, but being that we don’t even know who is coming back on the show in January, I wanted closure on this mystery woman with the B bracelet that Dixie remembers seeing.

The New York Times has an article about the end of the soap opera I have not read it yet however in case anyone wants or cares to read their take. The rumor is going around they are all going to be gone by next year.

It is a good article just read it , take a look!

I dont no what to think about the 4 that is still on after OLTL is gone in Jan 2012,
but Days Of Our Lives are bringing back some vets,and this is what most soaps do when thay are going off the air 🙁 its a sad time for all of us fans of soaps. 🙁

Days is guaranteed to be on the air through September 2013. They are bringing back vets to *avoid* cancellation at their next renewal date.

I have always enjoyed watching Greenlee, hope she gets back on the Prospect Park run.