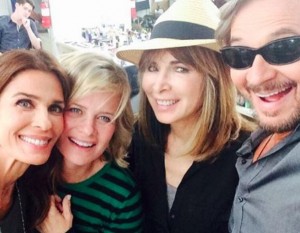 NBC is looking for Sony Pictures Television and Days of our Lives to change course in their production model, which currently has the show shooting episodes almost six months ahead of air as part of the ongoing contract talks between the entities for the beloved soap’s renewal.  Now whether that point can be hammered out in DAYS new deal with the network remains to be seen.

But Tuesday, according to a source reporting to Daytime Confidential’s Jamey Giddens, “The current production model doesn’t really give NBC the chance to make notes, or for DAYS to fix story and casting issues that might impact ratings.”

However, NBC’s requests are just the things that DAYS had to change in order for it to shore up budgets and remain on the air for several network pick-ups, by using cost-cutting measures to produce the shows at a quicker pace ahead of air.

With DAYS coming off a very successful 50th anniversary run in November through to the beginning of 2016,and up in viewership from the previous year, it is more than likely that an agreement will be reached by both sides in the very near future.

So, do you hope a deal can be reached which increases DAYS budget to be able to deliver the episodes anywhere between 3 to 6 weeks of taping, like the other network daytime dramas? Would you like to see that move made so casting changes that aren’t working, or storylines that are not striking a chord, can be gotten out of faster,  or do you hope that things can stay the way they are in order for DAYS to just stay on the air, and continue the lives of the residents of Salem? Share your thoughts in the comment section below.

Elizabeth Bogush Wraps Up Her Run As Y&R's Dr. Anderson By Thanking Cast, Creatives, and Fans!

REPORT: Have GH's Contract Negotiations With Rebecca Herbst Hit A Rough Patch? Are Sony and DAYS Waiting In The Wings?