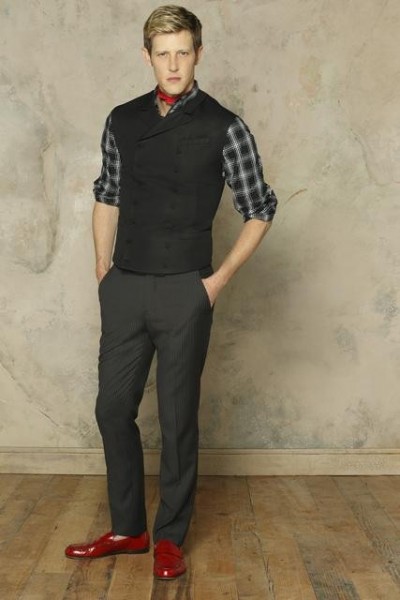 After the complicated twists and turns of season two of ABC’s hit primetime soap drama in the Hamptons, Revenge, season three looks by all accounts to have been freshened up and streamlined so viewers can continue to invest in the characters they love and hate … or, in the case of Revenge, think they love and hate until the next bombshell drops!

One of the most charismatic cast members of the series, who is adored by fans worldwide, is Gabriel Mann, who plays the ingenious and cunning software inventor and computer hacker, Nolan Ross.  While Nolan is best buds with his “Ems”, Emily Thorne (AKA Amanda Clarke) their relationship has been on a bit of a rocky road of late.  Meanwhile in season two, Nolan’s love life was a big ole’ mess: there was that girl, and yes, there was that guy.  In addition, Nolan found himself in the middle of plenty of peril and danger thanks to the Graysons!

On-Air On-Soaps caught up with Gabriel to chat about his presence on Twitter, which rivals no other from the ABC drama, what he thought of the conundrum Nolan found himself in season two, and where it’s all heading for the beloved character as we kick-off season three Sunday night at 9PMEST/8PMCST!

I love how enthusiastic you are on Twitter for your show!  You are really into it. You have truly harvested that whole aspect of social media for promoting, touting, and engaging fans who watch Revenge!   How come you decided to take social media by storm?

GABRIEL:  I realized it was a show that is so fan driven, that it only makes sense as that feedback started to roll in as the series had been going for awhile.  It was really nice to have that interaction with people. It became really nice to have this organic process of getting people’s feedback and the way that consciously or unconsciously it will start to play in the way things go on the show.  Whether it be the performance, or what have you, that is a real miracle of modern technology and social media.  We are so lucky that this year we have everyone from our show runner, Sunil Nayar, down to give or take a few of our actors who have not jumped on the bandwagon yet.  We have our writers, producers, and showrunner on Twitter!  I think it makes for a sort of more in-depth way of experiencing the show than just watching it.

What did you think about season two for Nolan and his confusing love life?  He had this relationship with Padma (Dilshad Vadsaria), and then there’s his ex Marco (E. J. Bonilla), who walks back into his life!  Were you saying to yourself, “Where is this going?”  Did it kind of seem to get lost in translation to you in the middle of the story?

GABRIEL:  I think we all were like, “Where is this going with the show?” (Laughs)  So much of the time we don’t know what is going to happen next, but I think season three is very much refocused.  We are out of the boardroom and back to the beach!  I would say sexual manipulation is a big part in season three. We got to explore what Nolan would be like if he had a High School sweetheart and a prom date in season two.  And certainly now that has been destroyed, I think he is busier now taking numbers and not taking names this season.   Is it love …or, is it revenge?  I think we will have to wait and see!  Nolan is not on the path to looking for true love. Whether he stumbles across it, who knows?  Would that make me scared for the character who plays his love interest? Yes, because it usually doesn’t end well for people who fall in love with Nolan!  (Laughs)

What do you think now about the friendship between Emily (Emily VanCamp) and Nolan?  It has endured, but there seems to be some significant trust issues there!

GABRIEL:  Absolutely!  I think there will continue to be trust issues between the two of them, but I think at the very least, there is a common ground and common understanding between the two of them that is a jumping off point for where this season begins.  I think they now have a common interest in taking down a common enemy, because they both have been hurt in very deep and irreparable ways by this very devious, evil, and ubiquitous family.  I think that will set them up in a similar path in season three.

Do you think this character of Nolan Ross is everything you now want it to be?  It really took off for you when the audience, and I presume the writers, took notice of how well you delivered the one-liners and zingers, and then you were able to bring the dramatic elements to it in your performance.  You seem to have shaped this role and informed it.

GABRIEL:  Thank you, that’s a good way to put it.  For me, you want to be just more than a one-liner.  It really was important for me to find the heart and soul of who this guy was, and sort of keeping the balance of being great with a quip, but at the same time having a heart as big as Texas, and at the same time sort of being able to be kind of devious.  Somewhere in between those three things is where I firmly wanted this character to live.

So, as we head into the premiere of season three, what do you think we can expect for Nolan’s journey?  Is he getting to the place where you want him to be?

So, Revenge fans, what are you hoping for Nolan Ross for season three of the series?  Romance, revenge, or something else?  Are you enjoying Gabriel’s performances?  Share your thoughts below!

GENERAL HOSPITAL: Luke He Comes Face To Face With Helena … Or So He Thinks!

BREAKING NEWS: Cynthia Watros Joins The Young and The Restless!

Another great interview Thanks Michael. Love Nolan and Gabriel Mann is such a sweetheart <3 This Aussie fan cannot wait for Revenge Season 3 to start. So excited about Justin Hartley joining the show and breaking some hearts. My poor Nolan to get out of jail .

Lovin Gabriel Mann/Nolan Ross.., he is awesome!!
Season 3 of Revenge will be great, looking forward to its return tomoor night!!!
Revenge and Scandal are 2 must see prime time soaps!! Drama at its best!!

I love Revenge and haven’t missed an episode! I LOVE Nolan/Gabriel… he is my favorite character and actor on the show. I wish we saw more of him! Gabriel is very talented and extremely interesting… I just want to see more and love the complexities he brings to Nolan. I want more of Nolan with Emily/Amanda and more of Nolan with everyone else… love Gabriel as Nolan!!!

I would love to see E.J. Bonilla return as Marco and have that relationship explored. I really didn’t get any sense of closure or understanding of the dynamics between Marco and Nolan.

Oh yes! My “favorite fabulous fashionisto” finally returns!!!!! Nolan is simply adorbs….love his witty, urbane humor, way with words, unwavering loyalty and of course, his cool, preppy goes haute look. A better BFF could not be desired….so envious of Ems!!! That being said, the show is always at its prime when Mr. Ross is gracing the screen with his presence….as far as I’m concerned, there is no “Revenge” without Gabriel Mann!!! He is like the ultimate, essential fashion accessory come to colorful life….and speaking of, hope his new digs include a massive walk-in wardrobe….would like nothing better than to see… Read more »