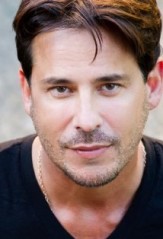 Breaking news this morning, but happy news to report!  Ricky Paull Goldin last seen as Jake Martin on All My Children, has decided to return to daytime!

According to an exclusive this morning from TV Guide Magazine’s Michael Logan, Goldin will begin taping a new character this week on The Bold and the Beautiful named Jesse who is, “the badass dude who fathered Maya’s child. ” According to a B&B rep, the baby daddy, “will arrive on the scene, see Maya with Rick and immediately get jealous.”

The casting of Goldin in the role of Jesse is non-contract at the moment, but said to have serious long-term potential!  Goldin related his decision to TVG stating, ” I’ve pretty much put acting on hold but when the Bell family asks you to do a role, it’s not that easy to say no! I worked for them many years ago on The Young and the Restless and it was a wonderful experience. I’m so honored to be back with them.”

The chance to play a villain also apparently enticed the daytime fan favorite:  “I’ve always been cast as the hero with a few flaws,” Ricky said. “Jesse is a really dark guy with a lot of potential layers and that’s very attractive to me. How long will he be around? That Fifth Harmony song from The X Factor keeps going through my head — ‘Anything Can Happen!'”

In addition, Ricky who turned down returning to Prospect Park’s All My Children launched his own production company and his first series, Spontaneous Construction will premiere on HGTV in April – with the concept that mixes, according to TVG,  social networking, extreme home makeovers, and flash mobs!

So are you excited to see Ricky return to daytime in his new role on B&B?  Let us know!

Cady McClain's Latest Blog: Let's Talk About The Kids (Of All My Children)!

Love this idea! He would be great with Steffi or bring back Amber for him!

Never liked him as Jake anyway….LOL

He’ll be gone within three months, if that.

If I were Ricky, I would not get my hopes up. B&B has a TERRIBLE track record when it comes to properly utilizing prime soap talent. They are hired with much fanfare, and then in under a year, they fizzle out and disappear with a whimper. Especially in this case, where his character will be tied to another non-established newbie. I do think its only a matter of time before he ends up back at AMC. He was just so natural and organic as Jake…its like the role was written for him.

Hmmm…saw him as Dean on the fab AW and saw him in ‘Grease’ as Danny. My mind is open to this. Could be good.

Please tell em this is not another move in the superstar day player game B&B seems the like playing. I’d like to see a non-Forrester man in town and one that does not end up in bed with Brooke and/or Taylor.

Dont know if he’d been old enough for the part but id liked to had seen him on DOOL as Bo Brady.

Jim he is 48 yrs. old and trust me if you blink you will miss him. Brad Bell has no respect for actors he would rather stick us with a triangle for 2 plus years. And Kim Matula/Hope resume has waitress at Hard Rock Cafe. One day if I have enough room I will list every actor that he has wasted on this show. Brooke has not grown up one bit and Taylor instead of finding true love is worried about the blonde bimbo. And still no Thorne who should be running FC with his Dad not the school kids… Read more »

Thanks 4 the reply. I stopped watching B&B around the time Steffy interupted Liams & Hopes predictible wedding … i guess the bride really got something old for her wedding-the pregnant third party!!!

I am surprised R Goldin would even consider B&B…I would reconsider that decision before it ruins his career. I am so sick of Taylor’s (many faces) she acts as crazy as her patients and you never know what/who she will look like when the scene rolls. She is desperate to keep in the main story line and now, she is with Eric Forrester…I am waiting for ‘Queen’ to come back from the dead and rattle the cages of Taylor/Eric…and finally send Taylor back to the asylum she escaped from… The writing on this show is the worst it’s ever been,… Read more »

Please do not waste him…Examples include Sarah Brown, Lesley Ann Down, Crystal Chappel, for heck’s sake I say they even wasted Betty White. Just my opinion.

Oh yeah, and let me not forget the wonderful Patrick Duffy. There was so much potential for Stephen Logan.

I love Ricky Paull Goldin..but hate the writing on B&B…I will be suprised if the character pans out but not cuz of Ricky but of the obvious egomaniacal writing…I loved Ricky even when he was on a soap I didn’t watch (either ATWT or GL) I don’t know which..if the character doesn’t pan out though it won’t be his fault…Oh & speaking of talent wasted on B&B what about Hilary (Nora OLTL)? another talent they wasted..but there is Taylor with her plastic lips..oh well..

Gloria it makes me furious that Hunter Tylo/Taylor did the botox but this is Hollywood and they think they have to do that the woman was gorgeous no need for that at all.

I understand what you mean but look at Susan Lucci or even the lady that plays Brooke they are older & they both surely have had SOME work done..but it doesn’t look like they are going into the Joan Rivers phase..it just doesn’t look good..she would be better off with a few lines..than look like her face is gonna crack into pieces..I saw Leslie Ann Warren one time at a place I was at & she is older than I am (60 & look pretty darn good still)..& she looked absolutely great & I am sure she’s had work done… Read more »

Let’s face it their are bad plastic surgeons out there and the more they do the more money they make. Lesley Anne Down is another one that has had work done but her’s is great.

Well B&B could benefit from an infusion of new characters, but I sadly have to agree with my fellow posters that this show has a lousy rep for getting new characters to stick and stay in the mix– glad to see him back in daytime, just wish it was a better gig that’s all.

Love RPG and will miss him on AMC 2.0, but he’s a great fit for B&B. Happy for him and glad to see him back on daytime.

I’m happy Ricky is returning to daytime, but I worry he’ll fade out on B&B. I would’ve preferred him on Y&R or DAYS. Or even the AMC re-boot.

Go get them Ricky Paull! Wooooooo hooooooooooooo back in my time spot!!!

Any Big actor who is not a Forester or Logan is a waste, Look what they did to sarah Brown and Sydney Penny. Most recently they brought on Jon Hennsey and wasted him too.

Since Ricky is actually a talented actor, I’m sure he’ll bring some much needed excitement to the show….It won’t ruin his career, only enhance it, he’ll become the stand out performer in all his scenes. Steffi is gross and if they decide to pair her with Ricky they will be making a big mistake.

I completely agree, I think Steffi is gross too…don’t pair her with Ricky..the character of Maya may be a newcomer but she is far more interesting than Steffi’s character…