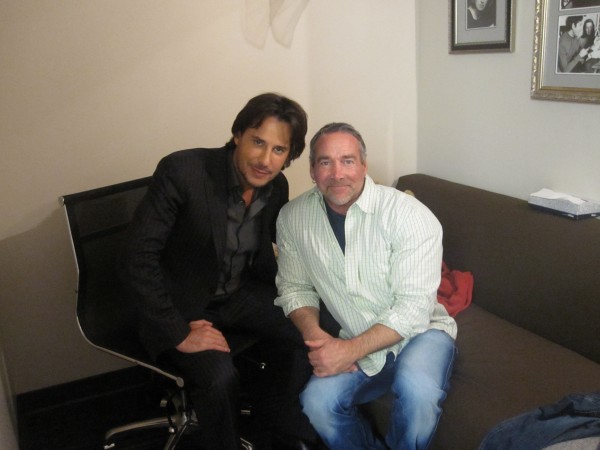 On-Air On-Soaps, Michael Fairman visited the set of All My Children to conduct a new interview with Ricky Paull Goldin (Jake).  During the chat, the actor discusses his upcoming Sunday night, TLC special, Seeing vs. Believing and what prompted him to create this road trip to the paranormal.  In addition, Ricky addressed the changes at AMC; from the move to L.A., new head writers, David Kreizman and Donna Swajeski taking the reigns and what it could mean for him, and what went down during the failed storyline with Beth Ehlers as Taylor.   Here are some excerpts below!

Goldin on what went wrong with Ehlers storyline: “I will say this: they wanted to tell one of the best stories ever on daytime, they wanted it to be Coming Home with Jon Voight and Jane Fonda, and then these two fall in love, Taylor and Jake.  Taylor saw her fiancée blow up, and then he shows up six months into these two getting to know one another and she is letting her guard down, and she can’t not be with him.  Now, there are a lot of corners to be easily painted into.  How do you tell that story, and then turn down this fantastic war hero and not be with him, and be with the Jake Martin character?  How do you do that successfully?  You can’t, because then you are the bitch.  You are painted into a corner.  It’s worse than raping or killing somebody on these shows, which is usually the kiss of death… for most…but now it’s not putting the old Ricky Paull Goldin and Beth Ehlers together, it’s doing the opposite.  But it’s the best efforts, and it was a great idea.  By the way, JR Martinez (Brot) has been doing a great job. The guy never acted.  I am thinking, looking at the history and what he has been through in Iraq, it makes him a full human being, and gives him an opportunity to shine… and look at him!

Goldin on frightening moments during the shooting of his TV special: “There was something terrifying in Hell’s Half Acre, that is in Hot Springs, Arkansas, which is cursed.  You step on something, and if nothing happens right away you think nothing of it.  Meanwhile, I walked out of that place, and I needed 21 stitches on my face, and I am an actor. You think I would do that to myself?   We got so freaked out.  I went to the ER, and Jeff Gurtman went to interview this American Indian, and Jeff said, “Nothing happened to me, but something happened to Ricky,” and the American Indian said, “Nothing yet.” And something did happen to Jeff after we got home.”

Goldin on new AMC’s head writers, Kreizman and Swajeski: “You know, I am getting older now.  I was one who did not burn my bridges, thank God.  David Kreizman was there at Guiding Light for the whole drug addiction storyline of Gus.  I actually broke a blood vessel in my eyeball with that storyline; because I was just a friggin’ mess everyday!  Donna Swajeski was there at Another World when I was just a punk.  So it could be a very exciting time coming up.”

The Ricky Paull Goldin Interview – All My Children

I really think that AMC dropped the ball, big time with Beth. I love this actress and she is so damn talented!! I really thought they were going to try and pair her up with Tad….they had a really good connection. And I’m sorry, I’m not giving AMC a freebie on this one, if they were good enough writers they could have written it to where the two had just changed too much to try to continue a relationship. Beth could have stayed on that show.

I agree, Torrey- and I can’t even find any information on where Beth Ehlers is now and what’s she’s doing. (Michael?)

Just have to stick up for GL. I watched that show for 30 years and when she left the show, she and Ricky were totally disrespectful to GL at the Daytime Emmy awards. I watched all of the final shows and didn’t miss her a bit. I always liked Beth Ehlers and I too think she is a great talent, but she had no place in the final days of GL. Gosh I miss that show!!!!!!!!!!!!!

i miss beth,i can’t wait to see her on t.v. or even on the big screen again

I have been one of the biggest fans of Guiding Light. When Beth and Gus (ricky p.g.) left GL I was defestated.I could not believe something so good would. I wanted them together on th show. It has been so long for me to find Beth and being thrown literaly off All My Children. I have nooo respect for that soap. Harley I have loved you from the minute you stepped on set.I definitelly would love to hear from you! I am 48 years old and have been very ill by 21 all due to severe endometriosis. GL gave me… Read more »