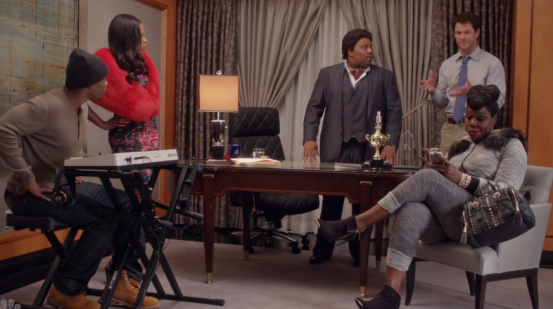 Last night on NBC’s Saturday Night Live, actor Chris Hemsworth was the host of the episode, and we all knew at some point SNL would spoof the mega-hot soap opera Empire, and last night they did!

However in this promo, Fox’s Empire decides to even broaden their “appeal” by adding a white male character named Chip played by Hemsworth, and plunking him right into the mix with the over-the-top gang from the hip-hop-world. Chip soon learns it’s not easy working alongside this group!

Watch what happens after the jump!  Let us know what you thought of the segment  … thumbs up, or thumbs down?

Peter Reckell Says On A Return To DAYS: "We Are Talking Again, Trying To Work Out A Deal For The 50!"

GENERAL HOSPITAL: Maura West Delivers Yet Another Knockout Performance … And Ava Learns She Is Dying!

Hilarious! So funny how the parody wasn’t far from the actual characterizations which aren’t meant to be comedic..the show for the most part is great but taken out of context like this it’s spot on and ripe for comedy.

I love EMPIRE on FOX, however, the SNL was not impressive. Hopefully, in the future SNL will get a handle on how to effectively write a funny scene… to parody Empire. It just wasn’t there for me. Though, I did like the SNL cast members who were cast in the respected roles. Try again SNL.

LOL! I thought it was funny! Well done!

I didn’t think it was funny, but Keenan was on point with the Terrance Howard impersonation, right down to the quivering voice.

OMG! That was sooooooooooo funny.