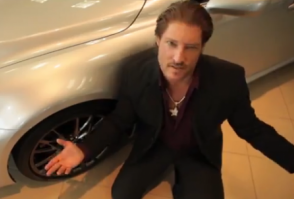 If you want to really see what life is like for a soap star attempting to hang with the A-list of Hollywood than look no further than this hilarious rap video directed by Michele Kanan starring her hubby, General Hospital’s Sean Kanan (AJ Quartermaine)!

And while Sean takes us through a rap romp about the  glamorous life of Tinseltown, he is joined by some other notables from the soap genre past and present including: Ronn Moss (Ex-Ridge, B&B), Joshua Morrow (Nick, Y&R), Kim Matula (Hope, B&B), and Patrick Darbo (Nancy, DAYS)!  Moss’ wife, Devin Devasquez also makes a cameo appearance!

The satire, lyrics ,and set-ups are enough to have you grinning from ear to ear!  Now after the jump, check out “I’m A Soap Star” and let us know your favorite parts?  And make sure to catch Sean and Michele each week on their hit Internet radio series, Kanan Rules!

Does Josh Bowman Want Out Of REVENGE?

that was great!good job everybody!

Hilarious! Love the ‘daddy’ line from his old on-screen ‘daughter’ Hope! I needed a laugh after watching Lulu and Dante give up the baby today on GH! Thanks!

Fantastic! I love Sean Kanan, and hope the reports of his firing from GH are not true. He is great as AJ, and we need more of the Quartermaines!

Now that was funny. Thanks Sean.

That was great. Funny to see AJ dressed that way? I am hoping AJ /Sean is not on his way out the way the rumors are going. First they lose Tristan ,now the reason I watch AJ ,will not be found guilty of murder and gone to jail. Oh well I enjoyed the rap .