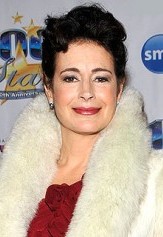 Film actress, Sean Young has been carrying with her a bad rap for several incidents with the “A” list in Hollywood including: Warren Beatty, James Wood, and Tim Burton.  Now she is working with the “A” list of daytime, when on June 8th Sean comes to The Young and the Restless to work with her pal, Eric Braeden (Victor) for a short arc. Seems Victor runs in to Maggie, a bartender, at a location that is a spoiler for the storyline.  Sean weighs in on her soap opera character with TV Guide Magazine.

Sean on role being described as “sultry” : “Maggie’s not very sophisticated. She wears an apron and a plaid shirt. She breaks up a bar brawl. She reminds me of Joan Blondell in that old TV series Here Come the Brides.  I just sort of walk onto a set that way. “Sultry” was their description. [Laughs] I just call it me!”

Sean on watching Eric Braeden work on the set: “You know what’s crazy? Eric memorizes his lines at Y&R by going into a kind of trance state. He’s like the Cyborg in Star Trek. He instantly takes in all this data and then suddenly he throws the script pages away and he’s ready to work. It was really wild to watch.”

Related Topics:eric braedenSean YoungThe Young and the Restless
Up Next

"One In A Millon" Daytime Singing Competition aimed for Daytime Slot!

I HAVE ALWAYS LIKED SEAN YOUNG SINCE SEEING HER IN NO WAY OUT,WITH KEVIN COSTNER.SHE TO ME IS A BEAUTIFUL WOMAN.HOWEVER IT SEEMS SHE IS HER OWN WORST ENEMY WHEN IT COMES TO GETTING ALONG WITH PEOPLE.SEEMS THERE IS ALWAYS SOME BAD PUBLICITY BREWING WITH HER.PART OF SUCCESS IS KNOWING HOW TO BE A TEAM PLAYER.HOPE SHE GETS IT TOGETHER BECAUSE SHE HAS A LOT GOING FOR HER.

I SAID IT AS I SEE IT .SORRY IF IT GOES DOWN BADLY