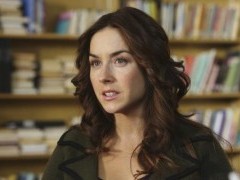 “Being Erica is a series that won the hearts of our audience and also brought new viewers to SOAPnet,” said Frons. “As the network continues to grow, we look forward to following Erica on her endearing journey of self discovery.” According to the latest figures from Nielsen Media Research, the network is in 75,255,000 homes as of May 2010, representing a distribution gain of 4 million homes over May 2009. Now in its tenth year, SOAPnet has ranked No. 1 in viewer loyalty for the past 15 consecutive months among Women 18-49.

Being Erica, which brought over half a million new viewers to the network in its first season and reached 3 million viewers in Season Two, has been picked up for 13 additional episodes. The series follows the life of single, funny, charming, candid and sexy 33-year-old Erica Strange. With the help of mysterious therapist Dr. Tom, Erica follows a time-travel therapy where she is able to relive a past regret each week in order to come back and make a positive change in her present. At the end of Season Two, Erica is stripped of everything — her job, her boyfriend and her life are left in shambles. However, unlike the Erica we first met back in Season One, this Erica is able to deal with these setbacks and turn them into positives. When Erica ends up standing in a strange hallway surrounded by different doors, she tells Dr. Tom that she’s ready to face whatever awaits her on the other side. When she picks a door, what will she find behind it?

Transformation is the big theme for Season Three, and we will see Erica emerge as a more confident woman who is on the path to forging a new identity. The third season stars Erin Karpluk (Erica Strange) and Michael Riley (Dr. Tom). The one-hour series, created by Emmy Award-winning writer Jana Sinyor, is executive-produced by Sinyor, Aaron Martin, Ivan Schneeberg and David Fortier, and is produced by Temple Street Productions in association with the Canadian Broadcasting Corporation and BBC Worldwide. Production begins in Toronto on May 17, and Season Three will premiere on SOAPnet in early 2011.

Sean Young on her upcoming stint as "Sultry" Maggie on Y&R!