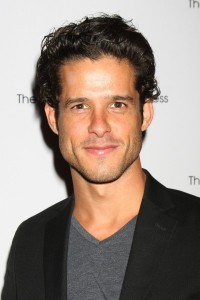 When Miles Gaston Villanueva (Ex-Luca Santori) was wrapping up his run on The Young and the Restless, he was also appearing in a workshop production of a new play, God Looked Away, working alongside none other than Academy Award and two-time Tony winner Al Pacino and two-time Tony and Daytime Emmy winner,Judith Light (Ex-Karen, OLTL)!  In fact, On-Air On-Soaps interviewed Miles during his final rehearsals to get the skinny on his part and working with two of the most talented and beloved performers in the business.

Now came word on Monday, that God Looked Away will now be playing for a few weeks at the reknowed Pasadena Playhouse, in Pasadena, California in the next leg of the production of this new work.  The play written by Dotson Rader is about the life of playwright Tennessee Williams.   As told to us by Villanueva, “The story in the play gives you a peek at Tennessee Williams trying to mount one of his plays, and the struggles he goes through to produce, and write a play in his later years.”

Villanueva took to social media to announce the exciting news that tickets are available to see the production: “So. It’s official. Starting January 2017, I will be back on the big stage, starring opposite Al Pacino in a new play, GOD LOOKED AWAY, at the Pasadena Playhouse in LA. It is the next installment after our beautiful workshop production over the summer. I am over the moon. Al and the entire cast and team are magic.”

The show will have performances starting on February 8th and run through March 19, 2017.

So, if you are in the Southern California area will you try to see Miles, Al and Judith together on stage in this intriguing new work? Comment below.

John-Paul Lavoisier Departs Days of our Lives With His Final Appearance!

Lucas Adams Joins The Cast Of Days of our Lives!

Just have to say…Judith Light is a goddess. Wonderful all around.

Wow, what an opportunity for Miles. To me, Al Pacino is our greatest living American actor. He continually challenges himself and the last ten years (when contemporaries like Robert De Niro are just phoning in many of their performances) have allowed him to do the best work of his career. ANGELS IN AMERICA; PHIL SPECTOR; YOU DON’T KNOW JACK; DANNY COLLINS…all brilliant work. And Judith Light has redefined her career in the past few years as well. Miles is probably on cloud nine!