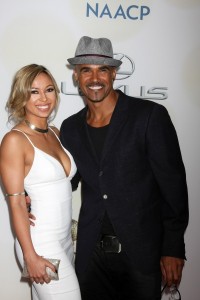 The daytime soaps were represented, in sorts, thanks to victories last night by some of the men who were recognized for their work at the 46th Annual NAACP Image Awards honoring excellence in the fields of motion picture, television, literature and music.  This year, the awards committee had chosen to delete from the categories the acting awards for Daytime Drama Series performers.  The 46th annual event was broadcast via TV One over the weekend.

Shemar Moore (pictured on the red carpet) took home the trophy for the Outstanding Actor in a Drama Series for his role on Criminal Minds!  Moore has been a long time favorite of the NAACP Image Awards having won several times previously for his role as Malcolm Winters on The Young and the Restless.  Last year, Moore made a special two-day guest appearance returning to his Genoa City roots in scenes with his on-screen brother, Kristoff St. John (Kristoff St. John).

Joe Morton, who had roles on Another World and All My Children, won for his performance on ABC’s Scandal for Outstanding Supporting Actor in a Drama Series! View the complete winners list here!

Happy to hear about  Shemar’s victory for Outstanding Actor in a Drama Series for CBS’ Criminal Minds? Comment below!

Sharon Case was dissed . She of all deservedan emmy. I do love Shemar. Wish he could come back to Y&R. We ALLLLLLL miss Victoria Rowell. as Drucilla. The show knows how much even more of a fight to get a character back then MM as Adam. WE WANT OUR REAL DRUCILLA BACK!!!! Hear our cry!!!! 🙂