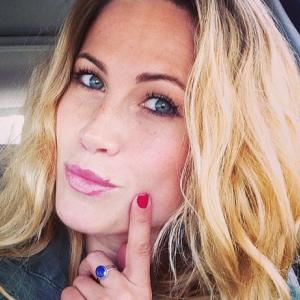 Some more soap stars, err former soap stars are on Bravo TV! This time it’s none other than former The Young and the Restless star Vail Bloom who played Heather Stevens on the show between 2007-2010.

Many have fans have wondered what happened to the talented beauty who was heavy in story with then Adam Newman played by Chris Engen!  Later, after Bloom left the number one soap, Y&R brought the character back in the form of Daytime Emmy winner Eden Riegel, only many felt that Bloom embodied the character of Heather.  It was also never really made clear why Vail left the show as she finally seemingly had won over the audience, but now it may have become a bit more clear.

In the key scene, Vail interviews with Vanderpump about how she is an actress who needs to make ends meet and needs a job.  When Vail tells Lisa that she graduated Princeton, Lisa doesn’t think with her smarts, looks, and experience, that she will stay long on the job.

In the confessional during the episode, Vail admits she got into drugs and the Hollywood lifestyle around the time she was on Y&R,  but that she has pulled herself out of that, and now she mediates wherever she goes, and is looking to put that part of her life behind her.

Below watch Vail’s debut clip on Vanderpump Rules where she gets the waitress job!  Then let us know, shocked to see Vail again?  Did you like her as Heather Stevens?  Will the reality series make Vail the breakout star of the season?  Comment below!

GENERAL HOSPITAL: The Judge Rules In Maxie's Visitation Hearing For Her Daughter! Did Helena Hypnotize Nikolas?

Good to see she’s turned her life around and is back on screen. Was great on YR.
Often wonder whatever happened to Chris Engen. Anyone know?

I loved them both and do wonder about Chris.

chris engen and vail bloom were hot as adam and heather!
vail bloom was the only heather that fit! the other two were brutal, sorry!
while on the subject of what happened to and why? why did y n r recast colleen from adrienne leon and what she is doing now?
i loved vail bloom as heather and adrienne leon as colleen!!
maybe days or b n b can use adrienne or vail bloom…

Sad she got into drugs, but glad she was able to pull herself out of it. Good luck to her. Maybe she can get some acting jobs.

It took two emmy winners to replace her: Eden Riegel and Jennifer Landon.

Well, I liked Vail and Eden. They both brought good things to the character of Heather. I wouldnt mind either of them returning since Paul has a son and is expecting another child. I think this time I would lean towards Vail because she was a bitchier version of Heather and I would love to see her chew into Dylan!

I recognized her immediately and then went into shock. She was the best Heather. I’m glad she got it together. Good Luck Vail

I just hope she doesn’t get involved with Jax. LOL
He’s a loser. lolol

SO happy to see the lovely and talented Vail Bloom back on my screen! I miss her on Y&R! Wishing her every success!

Vail Bloom is The only Heather. Thank God she’s better!

Vail was so beautiful as Heather and very good in the role. I also remember seeing her in a commercial back then. It is too bad that she got into drugs, but happy she straightened herself out. Not all can. It reminds me of Robert Downey, Jr. when he had his drug problem. I was so disappointed because the man was amazing and had such good physical comedy. I was so happy when he made his comeback and just look at his success now. I am happy she is back to acting, but it is too bad she is in… Read more »

Veil looks great and I would love to see her back on Y&R- she’s come through the other side-bravo! Adds depth to a person!

Does anyone recognize who the designer of Vail’s satin green dress she was wearing during an episode of Vanderpump?