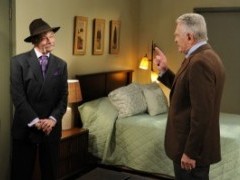 TOLN released the first episodic photo today of bad boy Billy Clyde Tuggle, played by veteran actor Matthew Cowles, who returns to Pine Valley and All My Children on Thursday, May 16. In the sneak peek photo, Billy Clyde is with none other than Dr. Joe Martin (Ray MacDonnell)!

When the reviled character of Billy Clyde fell of a bridge over 20 years ago in 1991, residents of Pine Valley thought they’d seen the last of Tuggle. But somehow the character and the actor himself managed to survive the plunge by landing on a mattress. A former pimp turned born again Christian, Tuggle is back to cause trouble, including coming face-to-face with Dixie Martin, played by Cady McClain, reigniting a dramatic storyline.

Cowles is one of television’s most versatile actors, his elevision credits include “Kojak,” “Miami Vice,” “Loving,” “The Bold and the Beautiful,” “Lonesome Dove,” “Law & Order,” “Homicide: Life on the Street,” “Oz,” and “Life on Mars,” to name a few. No stranger to the silver screen, Cowles has appeared in “Slap Shot,” “The Cowboy Way,” “The Juror,” “The World According to Garp,” “Nurse Betty,” and “Shutter Island,” among others. This multi-talented actor has also appeared on Broadway starring in productions of “Malcolm,” “The Indian Wants The Bronx,” “The Time of Your Life,” and “Sweet Bird of Youth.”

So excited for a Billy Clyde return?  Let us know!

Thursday's Cliffhanger Episode Of One Life to Live! – What Will Happen Next?

Maura West Debuts as Ava Jerome on General Hospital! What Was Your Reaction?

Uh…he fell off a Bridge…and landed on a mattress?
Was he in a coma for 24 years?

Okay, let’s bring back Donna next. 🙂

Candy is dandy, but Donna’s de-lish. I’d get up Early to see her return.

YES I am over the moon about it! He is my ALL TIME FAVORITE Soap villain! My sister who hasn’t watched AMC in over 25 years said and I quote: “Bringing back Billy just bought me back to AMC!” So yeah we are all really excited!

Amc is getting better and better. ABC you really made a big mistake,!

I stopped watching AMC for good about 5-6 years before it went off ABC because most of the storylines were either boring or ridiculous and my heart just wasn’t in it anymore. But I decided to give the online reboot a shot and I’m hooked! Love it! It’s terrific so far and I can’t wait to see what happens next! It proves that ABC/Brian Frons et al had an agenda to sabotage the show, to drive viewers away and get rid of it. This show (and OLTL, plus other soaps) has a large, extremely loyal audience that will follow it… Read more »

HI Rebecca. I think you nailed it. The show in the last years were so painful to watch. Withoutna doubt ABC and Frons had an agenda andnI think the actors knew it. It’s amazing to see the old reruns on soap net from just a short time ago, and the.n punch up the reboot. You see a light in the actors eyes that hadn’t been there for a long time. David, Jill, Julia, Vincent, Ray, Cady, Darnell. I think it’s more than the joy of bringing back their characters, I think it’s the joy of doing a show they can… Read more »