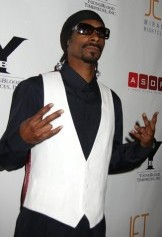 Multi-talented entertainer/Hip-Hop pioneer Snoop Dogg wrote the words “all that I have is ‘One Life to Live’” when he put his own spin on the theme song for his May 8-9, 2008 appearance on ABC Daytime’s  One Life to Live. Snoop Dogg’s remixed theme will once again air when he returns to Llanview for his second visit on Wednesday, February 24th.

The pop icon reached out to One Life to Live to once again play himself and perform on the show (taped  Thursday, December 1oth in the shows New York City based studio).  Snoop Dogg will perform “I Wanna Rock” from his new album “Malice N Wonderland”.

After Mary J. Blige made her second appearance on OLTL in February 2008, longtime fan Snoop Dogg let it be known that he was interested in redoing the theme song.  Not only did he remix the theme for the two episodes on which he appeared, but he performed two songs as well as acted on the show.  For his upcoming return, he will once again act in scenes with Bo Buchanan (Robert S. Woods) and will also be joined by Nora and Matthew Buchanan (Hillary B. Smith and Eddie Alderson). After spending time with his friend Bo and his family, Snoop Dogg will head to Capricorn for his return engagement in Llanview.

“Snoop Dogg’s desire to return to One Life to Live is a tremendous show of support for our show,” said executive producer Frank Valentini. “His unique contributions to the entertainment industry are vast as a performer, innovator and businessman and we are honored to have him back to perform and act on OLTL. We also welcome the opportunity to once again air his remixed theme song.”

“As I said when I was here last time, I’ve been a fan of ‘One Life to Live’ since I was a baby because my momma always had it on,” said Snoop Dogg. “It’s cool to come back and hang with Bo Buchanan and the people in Llanview and ‘rock out with them.’”