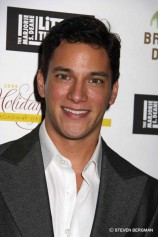 Nicholas Rodriguez is everywhere at the moment!  The talented actor who plays Nick on One Life to Live is also premiering today in a new web soap, Then We Got Help! Rodriguez portrays Dan, one half of a gay couple (Broadway great Blake Hammond plays Dan’s partner Eric), who is upset about his overweight partner’s lack of concern about his health issues. Dan and Eric are one of four couples who are participating in shoe model-turned-documentary maker Emily’s (Emery) experimental non-therapy therapy group.

Daytime Confidential’s Jamey Giddens caught up with Nicholas to discuss the new web soap but his red hot storyline on OLTL where Nick was victim of gay bashing.  Check out the excerpts after the jump!

DC: You are definitely sharing your craft on One Life to Live. Your scenes this week where Nick is in the hospital after being beaten up by homophobic thugs have been riveting. Was it difficult taping those scenes?

NR: Definitely. First off, I was nervous as hell! Secondly, there was the pressure to represent it accurately for everyone who has gone through something like that, not just being gay bashed, but any kind of physical attack because of who you are. I didn’t want to do anything that would disrespect anyone who had gone though that. Everyone I worked with in those scenes, from Scott Evans and Brett Claywell to Susan Haskell and Michael Easton were incredible. I mean, you’re working wit Susan Haskell, this Emmy-winning actress, and she just gives it to you! Everything she has. There’s nothing like it. She makes you better.

DC: The scenes were incredibly well done. You mentioned Brett and Scott, who play One Life to Live’s starcrossed gay couple Kyle and Fish, aka Kish. Your character, Nick, could have been a typical scheming interloper for soaps, but you have giving Nick rooting factor. Are you surprised that fans actually like Nick as much as Kish?:

NB:You know, I can’t say that I am surprised, because that was always the intention, at least for me! [Laughs]. It definitely humbles me, though that the fans are responding. At first, the character was only supposed to be on for a couple of days, but One Life to Live’s executive producer Frank Valentini pulled me aside and said, “You can make this character what you want. The more likeable you make him the more possibilities there are.” So I just sort of ran with that. I talked a lot with Brett and Scott about how to play the story. We all said, “Let’s not do the typical, jealous, spurned lovers” story. I wanted to make Nick likeable and human. The more we go along, the more excited I am about the role, because a.) I love playing Nick and b.) I love everyone I work with and c.) I want to keep playing Nick!

Snoop Dog returns to Llanview and One Life to Live!