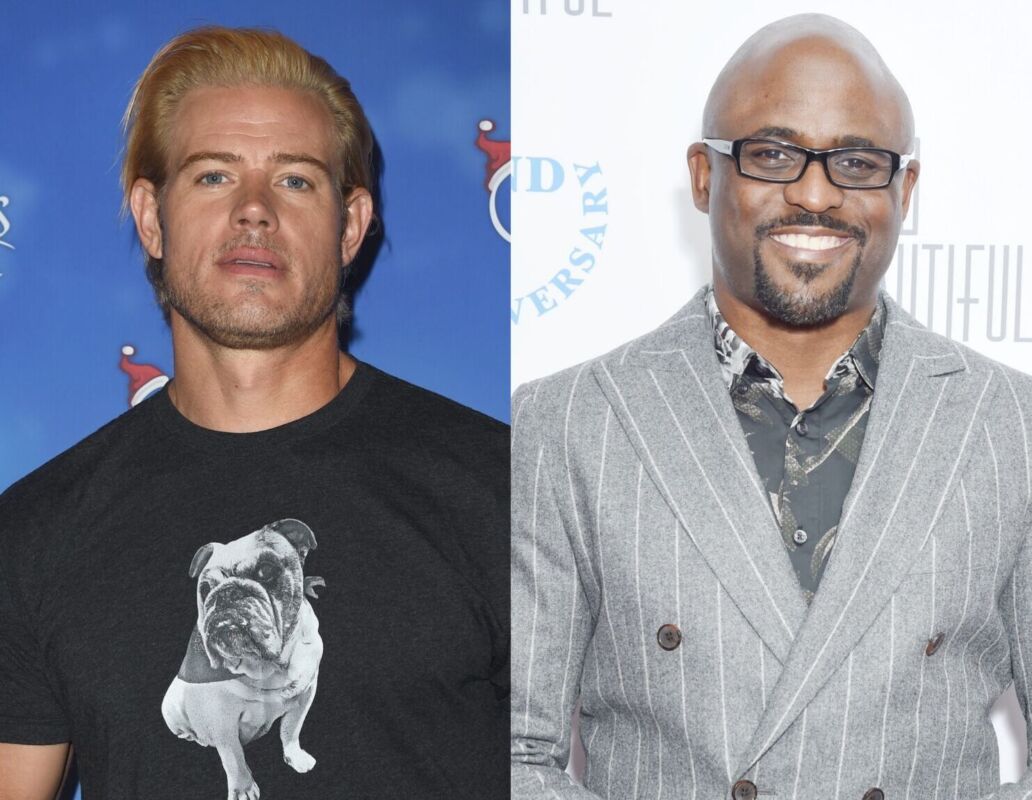 For the first time, DWTS will be exclusively on Disney+ (commercial-free) and it bows on Monday night, September 19th at 8pm ET/7 PM CT.

While some of the celebrity cast had previously been leaked, the full casting announcement for Season 31 came on GMA, and it included the news that former Days of our Lives, 90210, and Hallmark Channel romance movie staple, Trevor Donovan (ex-Jeremy Horton) will compete on the show as well as Let’s Make a Deal host and former The Bold and the Beautiful star, Wayne Brady (ex-Dr. Reese Buckingham).

During the GMA segment it was also revealed who each celebrity will be paired with as their pro partner for the competition … and it shakes out like this:

So, who do you think has the best chance on paper of winning the Mirror Ball Trophy? Let us know in the comment section below.

Days of our Lives Airs Last Episode of Its Historic Run on NBC; Heads Exclusively to Peacock Monday

Is it a short newsday? 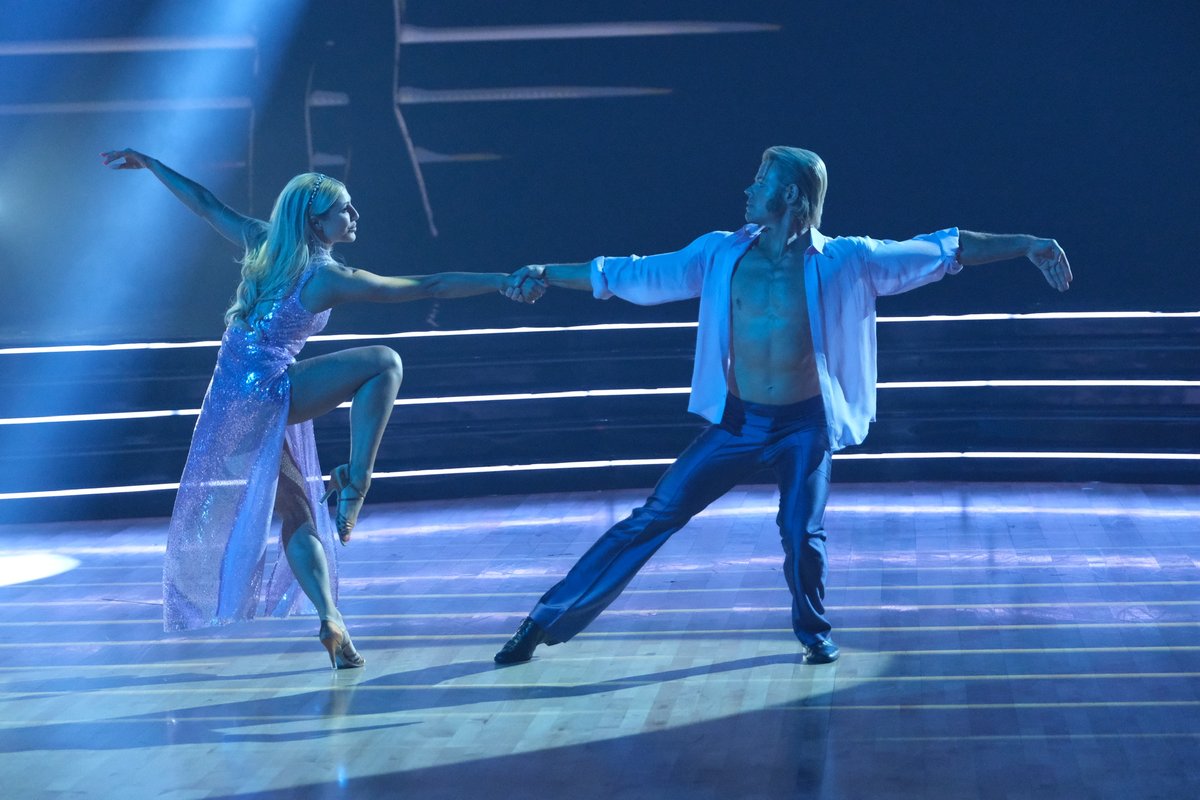 In the second episode of Dancing with the Stars new season exclusively on Disney+, it was ‘Elvis Night’ and the couples put on a show for the judges performing to songs by ‘The King of Rock and Roll.”

Before the stars and their pro partners hit the ballroom floor, hosts Tyra Banks and Alfonso Ribeiro, revealed that since dancer, Daniella Karagach tested positive for Covid-19 Sunday night.  Therefore, her celebrity partner Joseph Baena had to mask up through the evening and perform his planned routine with a temporarily replacement, Alexis Warr. As well, a few others in the cast who were noted to be in close proximity of Karagach, also wore masks during the live show and their performances.

Here’s a rundown of a few of the performances that wowed the judges for various reasons.

Trevor Donovan (ex-Days, 92010) and Emma Slater – The duo danced the Rumba to the Elvis Classic “Always on My Mind.” Donovan, who keeps letting us know in the pre-package that he is not comfortable as a dancer, did a complete 180 from opening night and delivered what the judges deemed a very sexy routine with Emma. The judges (Carrie Ann, Bruno, Len and Derek) were impressed by Trevor’s hip rotation, his arm extensions through the dance, and of course his abs! Derek Hough said it best in his feedback to Donovan following the routine, “Remember when you were scared of dance? You love dance.” Score: 30 out of 40 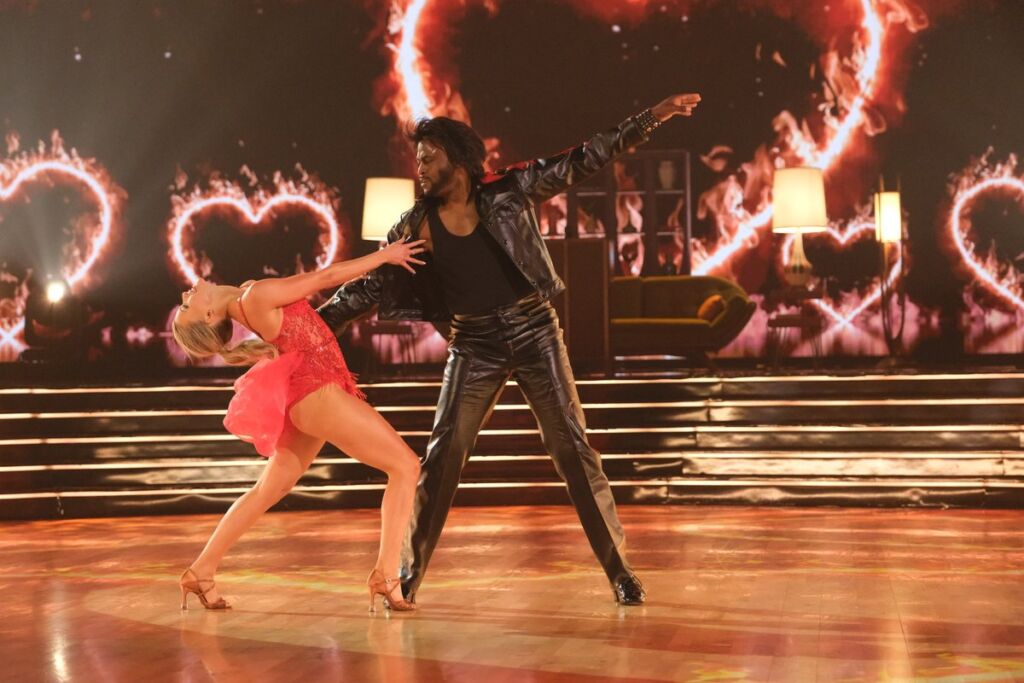 Wayne Brady (ex-The Bold and the Beautiful, Let’s Make a Deal) and Witney Carson –  Dancing the Jive to “Burning Love”, Brady, who is great at impersonations anyway, brought some of the Elvis moves, facial expressions and ticks to the routine. In the pre-package, Wayne revealed he has trouble with one of his knees. The performance was highly-entertaining given the choreography and closed the show.  The judges told Wayne to pace himself and protect his knees, because he is a wonderful dancer and they want to see him make it through the entire season. Score: 30 out of 40 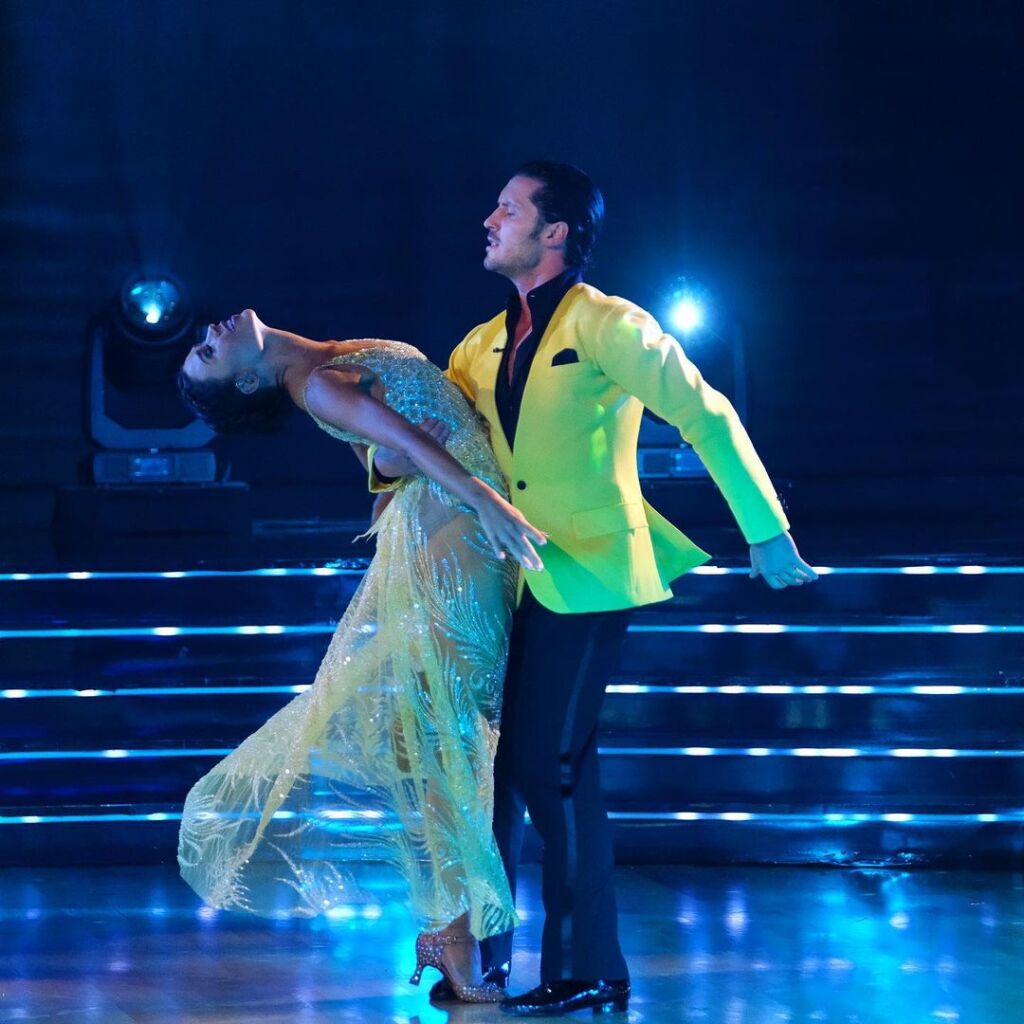 Gabby Windey (The Bachelotette) and Val Chmerkovskiy – The dance duo took to the floor to perform a classic Viennese Waltz to “Can’t Help Falling in Love.” During the pre-package, Windey, who is also a former Denver Broncos cheerleader, felt she was ‘lost in space” doing so many twirls, but she clearly got it all under control and with Val by her side, her new fiancé Eric Schwer in the house. Val and Gabby delivered a stellar performance.  The ending of the routine was punctuated by Windey walking over to Schwer, who entered the edge of the dance floor, to give him a smooch. Score: 32 out of 40

Daniel Durant and Britt Stewart – Taking on Elvis’ “King Creole”, this dance duo performed the Jive.  It is amazing to witness from the pre-package to the actual performance, how Britt communicates with Daniel, who is deaf, and how Durant is able to feel the vibrations, watch Stewart’s face and inhabit a character so well, without barely any missteps. The most noticeable, and the most difficult challenge posed to Durant, is dancing in the side-by-side sections where precision/synch is always favored upon by the judges. In the DWTS audience were Durant’s CODA co-stars, Oscar Winners Marlee Matlin and Troy Kotsur, rooting hm on. It was an impressive performance! Of note: how much did we love Durant’s two moms showing up in rehearsal and dancing some moves from the routing with him! Score: 29 out of 40 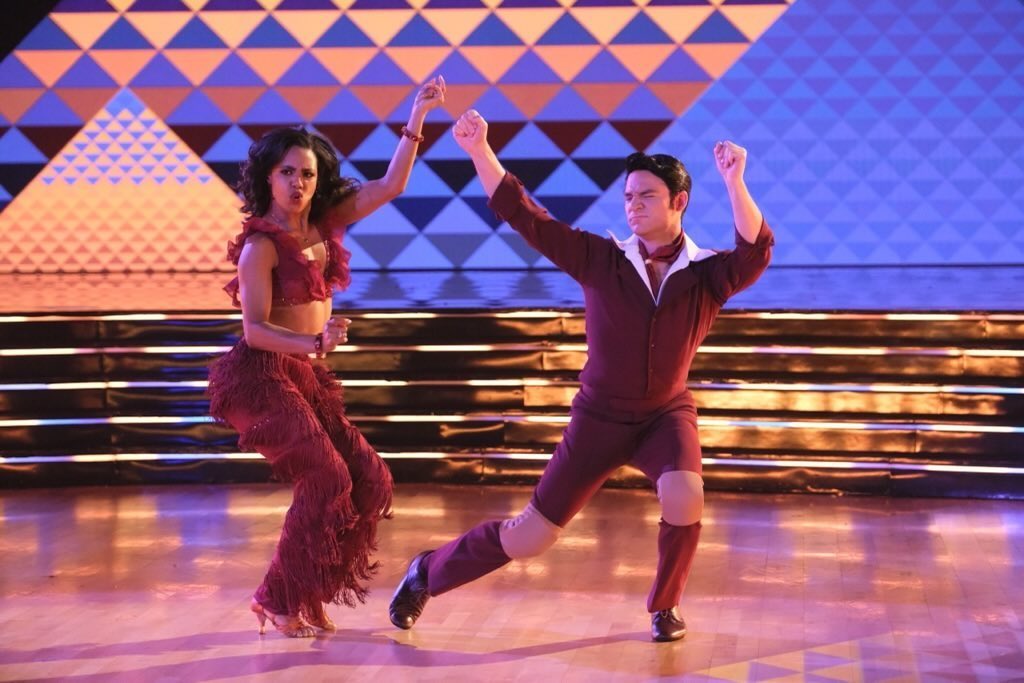 In other honorable mentions: TikTok star Charli D’Amelio and pro partner Mark Ballas continued to impress, tying for the top spot on the leaderboard with Gabby and Val and Wayne and Witney. It has also been poignant to watch the valiant Selma Blair overcome the obstacles of MS and be able to dance as well as she has with her pro partner Sasha Farber.  Blair delivered another remarkable performance.

When the smoke cleared, after the voting at home combined with the judges score, the bottom two couples were announced: Real Housewives of New Jersey star Teresa Giudice and Pasha Pashkov, and former Charlie’s Angel star Cheryl Ladd and Louis Van Amstel. 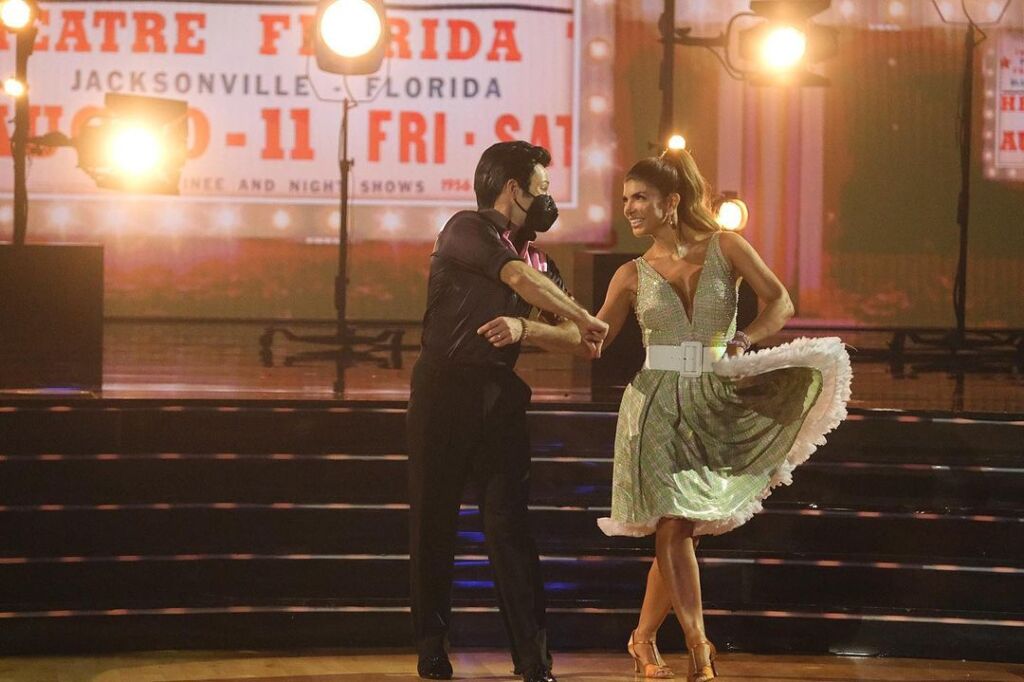 Since it’s now in the hands of the judges,Derek and Bruno saved Giudice, while Inaba chose to save Ladd.  Head judge Len Goodman has final say. He made his vote known for Cheryl Ladd, and thus Teresa and Pasha were sent home.

So, which couple impressed you on ‘Elvis Night”? Let us know in the comment section below.

‘Dancing with the Stars’ Premieres on Disney+; Who’s Looking Good After Night One of Competition 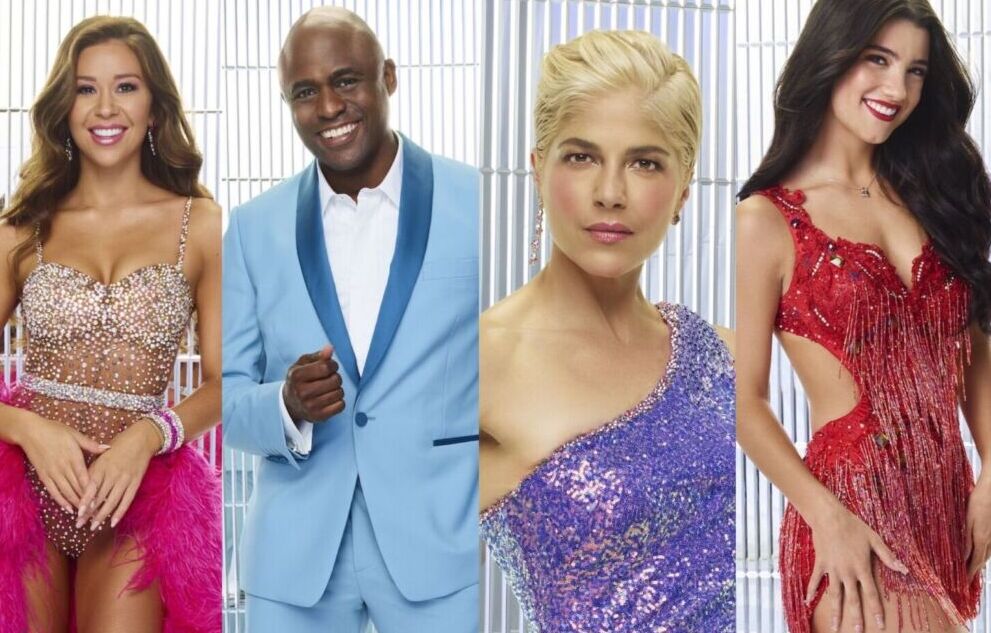 The aging ballroom-dance competition franchise, Dancing with the Stars, premiered on Monday night in its new home on the Disney+ making it the first live series to hit the streaming service.

This marks the shows 31st season and now viewers will experience a commercial free competition/reality series complete with the producers figuring out ways to kill time to get the dance duos up to the Sky Box to talk with new co-host, Alfonso Ribiero.

Tyra Banks is back in the ballroom as your main host along with judges Carrie Ann, Bruno, Len and Derek. On the season opener, there were some terrific starts by some celebrities and their pro partners, and there were also some not so good ones.

However, let’s recap some of the night’s brighter moments which featured: Wayne Brady (Let’s Make a Deal and ex-B&B), Actress Selma Blair, The Bachelorette Gabby Windey and TikTok star, Charli D’Amelio.  All the competitors danced to songs that really gets them going in the premiere.

In the most emotional moment of the night, that brought tears to everyone’s eyes, was the performance of Selma Blair and her pro partner, Sasha Farber who turns out to be her neighbor in real-life.  Blair, who is battling MS and was diagnosed with the disease in 2018, shared her biggest issue with dancing is her problem with balance. However, Selma danced a beautiful Viennese Waltz with Farber and  28 out of 40 score.

TikTok sensation, Charli D’Amelio, has been dancing since she was very young.  She is now 18.  Dancing the Cha-Cha, along with Mark Ballas, proved to be the hit of the night and the producers saved the best for last.  Charli and Mark scored a 32 out of 40.  We should note: Charli’s mom, Heidi is also dancing in the competition.

Wayne Brady wound up in second place after the judges voting with his Cha-Cha; which featured some pop and lock moves with partner, Witney Carson.  Judge Bruno exclaimed: “Welcome to Wayne’s dance floor! Performance level through the roof. You’ve got it and you know what to do with it!”

It’s a big week for “Bachelorette’ Gabby Windey. Tomorrow night is the season finale of her season to find love, but on Monday night, she showed us why she has some moves to be a threat in the competition for the coveted Mirror Ball Trophy.  In the pre-dance package, we learned Windey was a Denver Broncos cheerleader for five years.  She then danced the Jive with pro partner, Val Chmerkovskiy and scored a 28 out of 40. 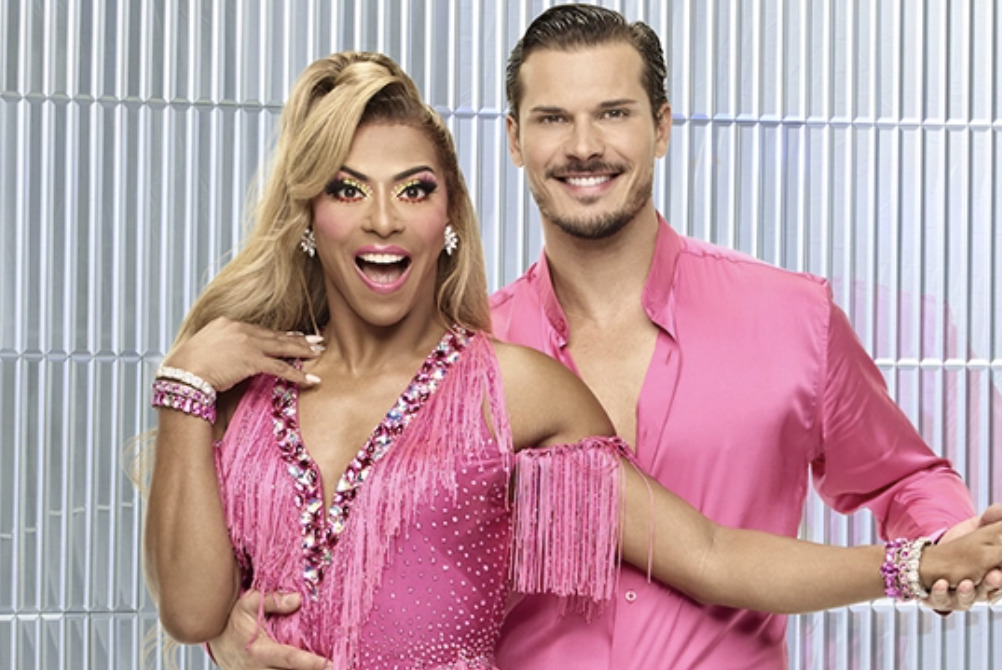 Don’t count out the first ever drag queen to dance in the competition, Shangela, either!  Dancing with partner Gleb Savchenko, Shangela brought it to the dance floor and the crowd went nuts, scoring 28 out of 40 for their Salsa.

Former 90210 and Days of our Lives star, Trevor Donovan while having a fear of dancing, performed better than expected along with his pro partner Emma Slater, taking on of all things, the Quickstep. Donovan and Slater scored a 21 out of 40, and remained in the competition.

So, who do you think has a solid chance of taking home the Mirror Ball Trophy? What did you think about watching DWTS on Disney+? If you didn’t watch the season premiere tonight, will you check it out on the streaming service? Comment below. 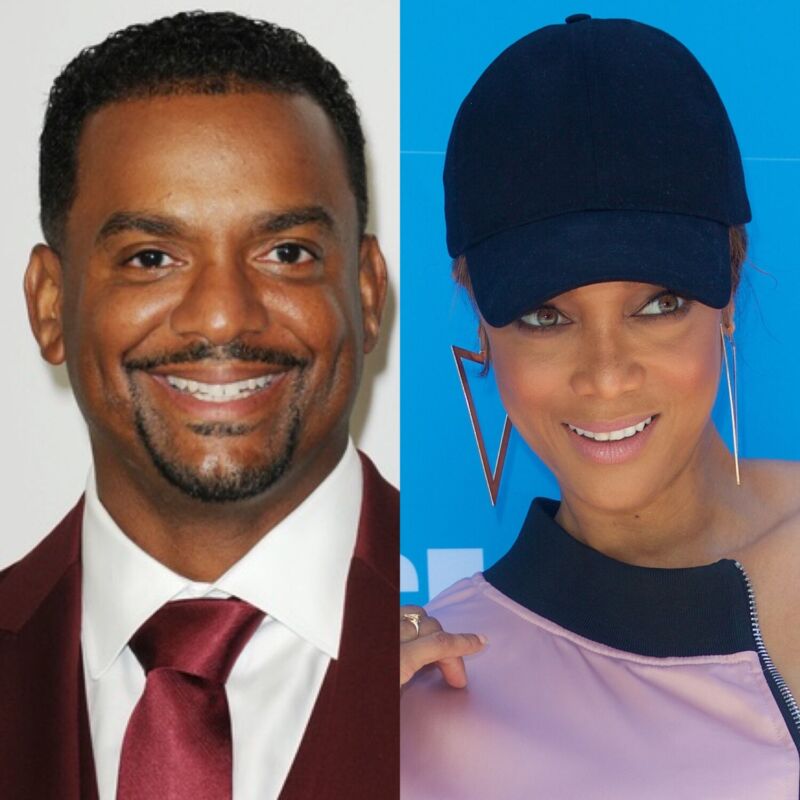 In another move to shake up the ballroom dance floor competition, Dancing with the Stars, it was revealed today on Good Morning America, that Alfonso Ribeiro would now be joining Tyra Banks as co-hosts for its upcoming season.

As previously reported, Dancing with the Stars will stream on Disney+ making it the first live series to be on the platform. The dance show had previously aired on ABC for the past 30 seasons.

There has been no premiere date set for DWTS season 31, but ahead of that, in a statement, Ribeiro shared: “Dancing with the Stars has been such an important part of my life for so many years, and I am ecstatic to officially re-join this tight-knit family as co-host. Tyra and I have a longstanding friendship that I hope will resonate with all of the fans at home as we kick off this new season on Disney+.”

Banks added: “I’ve known Alfonso since I was 19 years old and he always puts a smile on my face whenever I see him. Having such a fun-loving, longtime friend as co-host warms my heart. Plus, he’s won the competition before, so he knows exactly what the stars are going through. Bantering back and forth with him live is going to be so much fun!”

So, what do you think about Alfonso and Tyra as co-hosts of DWTS? Share your thoughts below.

The news is out! 👏🏾 I’m so excited to be the new co-host of @OfficialDWTS, coming soon to @DisneyPlus, along with Host Tyra Banks! #DWTS pic.twitter.com/zLTehmjpXY