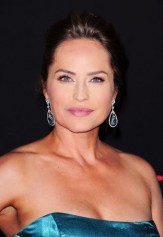 Michael Fairman’s monthly column Soapside: The Advocate Guide’s to Daytime is now live and features coverage from The 37th Annual Daytime Emmys with quotes, moments, and news from the red carpet, parties, press room and casinos!  With the Emmys being in Sin City, Las Vegas it made for, to the least, an interesting red carpet for LGBT favorites.  Here are a few excerpts!

DAYS Crystal Chappell, who lost her bid for her well deserved Lead Actress Emmy, had this to say about her Emmy luck and the Otalia story on Guiding Light. “I am a huge fan of the story they gave me. I am very lucky that my peers liked it. You know what? I had an experience a few years ago when I was nominated, when everyone came up to me, saying, ‘You’re going to win, you’re going to win.’ And I am going, ‘Oh, God.’ And I didn’t win, and then everyone was really embarrassed, and they kind of avoided me the whole night. So not only did I get screwed with the Emmy [laughs], I got ignored. So I take it with a whole grain of salt, and I am lucky to be here. I am lucky to have another job at this point, and I am a grateful girl, and somebody gave me a $25 Vegas chip.”

Eden Riegel (Heather, Y&R) mentioned that in recent scenes with Elizabeth Hendrickson (Chloe),  she couldn’t help but have some….sexual confusion… in scenes where she was supposed to be making eyes at John Driscoll’s, Chance , because of her past on-screen same-sex relationship with Hendrickson on All My Children: “The first scenes we had together, I was kind of making eyes at Liz, and there was sort of a sexual thing going on. I went, Uh-oh, wrong show, Eden. You got to put that under wraps. That was in rehearsal. So I said to myself, I have to look like I hate her. I have to look like I hate her. I had to look at her forehead and pretend she is somebody else. Now I am getting better at it, and I narrow my eyes and look like I don’t like her.”

Make sure to read the entire Soapside wrap-up for more fun tibits.

I DO NOT KNOW WHAT CHARACTER EDEN PLAYED ON ALL MY CHILDREN, BUT I DO KNOW, I DO NOT LIKE HER AS THE NEW HEATHER ON YOUNG AND RESTLESS. MANY VIEWERS SHARE MY SENTIMENTS. SHE DOES NOT KNOW HOW TO ACT LIKE AN ASSISTANT DISTRICT ATTORNEY AT ALL! SHE IS SO NEEDY AND JUST SO PATHETIC IN THIS ROLE. I HAVE NOTHING AGAINST THIS ACTRESS, BUT I DO FEEL SHE AS A TERRIBLE RE-CAST FOR THE HEATHER CHARACTER, PHYSICALLY AND PERSONALITY WISE. DEFINATELY NO MATCH FOR THE CHANCE CHARACTER. THEIR IS NO CHEMISTRY THERE AT ALL. CHANCE BELONGS WITH CHLOE.… Read more »