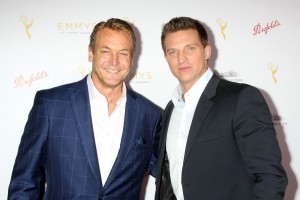 Not only will viewers of CBS Daytime’s The Young and the Restless and The Bold and the Beautiful have an opportunity to participate in a casting call to appear on one of the two soaps, but if you are in the Philadelphia area this Thursday August 18th, Y&R stars Steve Burton (Dylan) and Doug Davidson (Paul) will be on hand as special guests!

What’s it all about?  Well, CBS Daytime is partnering with CBS-owned or affiliated television stations to conduct local casting calls.  Each station will then submit its top finalist picks to CBS for the national casting call, with one lucky person being flown to Hollywood to appear in an episode of either Y&R or B&B.

The Philly casting call from CBS3 will be held from 12pm–3pm at the SugarHouse Casino.  And if you aren’t in Philadelphia, there are upcoming chances to participate in a call in the weeks ahead in Baton Rouge, Lousiana – Rochester, New York -Toledo, Ohio – Tulsa, Oklahoma – and Arcola, Illinois.   For more on  dates, times and locations, and how you can participate in the CBS Daytime casting call click here.

So, if you could win the CBS Daytime casting call, what role could you see yourself playing?  Share your thoughts in the comment section below!

If I won a casting call? Well, in a dream world, I’d want a romantic (not bedroom, just romantic) scene with Greg Rikaart, because he looks to have a great sense of humor and he’d need it to do the scene with me. I’d have loved to do a scene in the old Chancellor house set; it looks cozy despite its mansion status. I’d also like to be on a set with Jill unleashing her fury on Hilary…that would be a treat.

I know, Soaphound. You pegged Greg correctly. He always has that mischievous little twinkle in his eye. Love him. He makes me smile just by standing there.

If I won I would play the role of Duncan Hines, a baker , and I would slip poison into Glummer and Kooka’s wedding cake.

No need to worry Jay, Paul and Dylan are to worried about each others agendas to catch me! Ha ha ha!

And I will whip you up a little Icelandic confection because you are so sweet!

Would love to play a friend of Nikki’s from her stripper days or a friend of Jill’s from her days as a manicurist ,returning after a long absence from Genoa City with damaging secrets from the past. Or…….any scene with Victor containing lots of banter back and forth!

I wish it were just banter passing through Victor’s lying lips, Sandy. LOL. You have nice sentiments for these characters….who, in their own way, are all three degenerates. Nikki’s superior attitude is riddled-full of less than honorable holes; and Jill (from less-than modest beginnings) has much to answer to/for as a mother, daughter, wife and friend. Nonetheless, they are both the best!!!!! And, it warms the heart to see Jill and her familiar presence. Victor is all that is despicable in a father and human being. But, I cannot deny Eric’s tenacity and professionalism. He still rocks as one of… Read more »

Celia…not only do I get (and agree with) what you’re saying, as far as I’m concerned, Nikki’s ‘attitude and everything else’ is full of storyline holes…LOL!!!!! Oh…and BTW, at this point, It would take a CROWBAR (or something) to PRY OPEN Nikki’s sense of humor…MORE LOL!!!!! What a sourball?!?!?