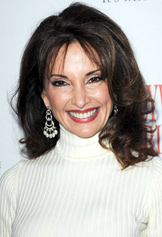 So what is All My Children superstar Susan Lucci’s (Erica) response to Academy Award nominee, Lee Daniels (Director, Precious) that he would love to work with soaps most recognizable name?  Well, TV Guide Magazine got a hold of La Lucci and here are a few of the excerpts from the conversation!

Lucci on Daniels having always wanted to work with her: “I had no idea about this until just today! I’m so thrilled and flattered, and I’m glad it’s on YouTube so I can check it out. Lee Daniels! Wow. This man has done such magnificent work and I’ll certainly be watching him on the Oscars. It’s funny. People always ask me who I’d like to work with—meaning actors, of course—but my mind always goes to great directors. To work with Mr. Daniels, to have the luxury of that man’s talent, is a very exciting thought. And to mention me in the same breath as Meryl Streep and Daniel Day-Lewis—two of the actors I most admire—is, well… I just don’t know what to say. I’m very honored.”

Lucci on this giving some validation to daytime drama performers:
“You know how it is in the [mainstream] press. People don’t really talk much about daytime. So it’s very brave of Mr. Daniels to acknowledge All My Children in this way. How wonderful that he says what he really thinks.

Tristan Rogers to speak on panel on current state & future of soaps!