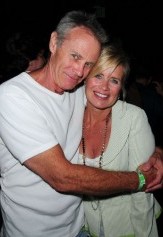 Last night, the stars of Gregory J. Martin’s new web soap, The Bay showed up in full force for a special screening the night before you the fans see the first webisode!

Also hanging out were:  Andrea Evans and Christopher Atkins,  Jacklyn Zeman, Brody Hutzler,  Kate Linder, Thor Knai, Matt Borlenghi and an assorted array of recognizable faces from daytime and primetime television.  Several of the aforementioned actors will be starring in a spin-off we hear of The Bay coming in January!  More on this later.

The actors, press, and crowd in attendance watched the giant screen at Henry’s Hat Restaurant and Pub owned by the fabulous Martha Madison, to get their first glimpse of the series.  The opening music theme was written and performed by Kristos Andrews sister, we are told.

After the screening, everyone chatted, drank… and had a good time.  Here are a few images of the night, followed by the first webisode of The Bay after the jump! So what is your review of the initial installment? Let us know.

ATWT: A Snapshot Gallery! Through the Years of the Citizens of Oakdale

gee this a pretty good soap hope theres more coming in the furture we have been waiting for this to get here like forever well its here & it looks like a winner!

Looks interesting to me! Looking fowrard to watching more…