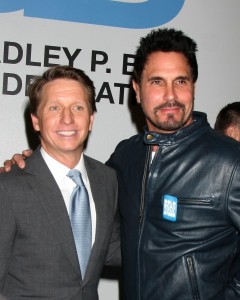 Next week on Monday, March 23, 2015 The Bold and the Beautiful will mark it’s 28th anniversary!  The lives of the Logans, Forresters and Spencers have continued to entice fans to tune-in every day to see the drama and romance that transpires between the characters they love to love, and love to hate.

The series executive producer and head writer, Brad Bell said of B&B being on the air for 28 years, “Twenty-eight years on television is a tremendous achievement, I work with a brilliant ensemble of cast, production crew, writers and staff.  I am grateful to CBS for their unwavering support and for their longstanding commitment to The Bold and the Beautiful. None of this would be possible without the steadfast loyalty and dedication of our fans around the world.”

Share your congrats on B&B turning 28 years young below, and let us know how long you have been watching B&B!

Oprah & Common Planned For Roles In Season Two Of EMPIRE!

I am begging Bradley Bell to write a better show. Right now, it’s dull, poorly acted in some stories, and taking too long to get to a payoff in the Rick/Maya storyline where they both get their comeuppance. All the international shoots in the world won’t matter if the story, and some of the acting, continues to be bad. B&B has lost its way as of now. Let’s hope it gets back on course soon.

How about bring The Forresters back to the show! Let’s get Thorne, Felicia and Kristen back to run their Mothers company since Dad has gone senile. Thorne could mop the floor with Rick for his treatment of his daughter and I would love to see Felicia take on Maya. Being in her Mothers house I would pay big bucks to see Leslie Kaye clean house. But at last it will never happen thiose years are gone!

Without Ronn Moss and Darlene Conley, the show has lost its identity. Don Diamont is not an adequate replacement for two icons.

Well since no one else is going to congratulate them for reaching such a mile stone I will. Congrats B&B– not too many shows last that long so good for them for surviving thus far. And Brad if you haven’t done yet– why not do your next location shoot in Canada