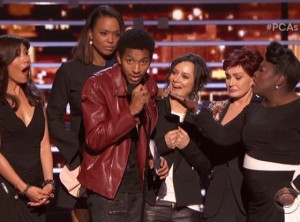 If you caught Wednesday’s presenation of the People’s Choice Awards on CBS,  you know by now that the ladies of the CBS afternoon series, The Talk found themselves once again at the epicenter of a watercooler moment at an awards show.

Daytime Emmy fans will recall Aisha Tyler’s save when the ladies were handed the wrong envelope and almost gave the award to the wrong soap opera!

This time it was the talk show hosts themselves who were being honored by the fans who voted for them in the category of Favorite Daytime TV Hosting Team.  Upon hitting the stage and beginning her speech, Sara Gilbert, accepting on behalf of Tyler, Sheryl Underwood, Sharon Osbourne and Julie Chen who were all standing beside her, was interrupted by a stage crasher who grabbed the mic away from her.

After sharing his name, this dude promoting his new record gave a shoutout to rapper Kevin Gates, before Sharon Osbourne began kicking him in the butt repeatedly with her heels.  “You’re not going to pull no Steve Harvey up in here,” Sheryl Underwood added while backing up her co-host. “Not here, not here. Back to your speech girl.”

Wednesday morning, LAPD Media Relations confirmed to E! News that the stage crasher’s name was Zicario Nicasio. He was arrested by private security at the People’s Choice Awards. He was charged with a misdemeanor for interfering with a live event.

Watch the latest watercooler moment featuring the ladies of The Talk after the jump! Then let us know how you think Sara, Sheryl and Sharon handled the situation … we think they took care of the guy pretty swiftly!

DAYS OF OUR LIVES: Nicole Says Her Final Goodbyes To Daniel & Chad Remembers!

WTH does Steve Harvey have to do with it?! He made an honest mistake (god forbid people are human) but in no way relates to someone crashing their speech. Get over yourselves already.

Yes he should have been removed, but she had no business insulting someone who had nothing to do with it in the process.

I think she meant to say Kanye West but Steve Harvey may have slipped out because of the earlier skit with Miss Colombia.

I agree with you @dhosier. What the heck was that shade for Cheryl? I tune in sometimes to watch their show, depending on the guest. To be honest the only one I can tolerate is Aisha, she’s seems down to earth and doesn’t come across as phony. Julie is tooooo full of herself because she’s married to the Boss, without him she would still be broadcasting on some news show.

I agree with you all. Those women are so annoying. Julie Chen is the worst – she is so full of herself as you said penny.

Two people on TV that I cannot stand are Sheryl Underwood and Sharon Osbourne but I tip my hat how those two handled that Kanye West wanna be!

My gawd those women are annoying..
How can people tolerate them.. LOL

I stomach them when a soap star is on but now that they are grabbing good ratings they discount our sud stars and dont have them on anymore!

Why is there no security around these stages or for that matter the front few rows of stars. This happens far to often and started with Kanye West who did it to Taylor Swift. They need to be kicked out not to be allowed back in. Congratulations to Sharon Osborne who should have kicked him harder, and by the way what was wrong with that guy on stage that he stood there like a clown letting the ladies handle it.

Considering the turmoil around the world; you’re absolutely right, Nikki.

Nikki, these things are planned. They do not just happen randomly. These places are CRAWLING with security. The guy would not have made it up the first three steps without being hauled off by security. He most certainly would not have been allowed to ramble, and then get assaulted by these women. These things (like the Taylor Swift/Kanye debacle, etc) are planned for maximum impact and shock value.

GOOD QUICK THINKING BY THESE WOMEN…..WHERE WAS SECURITY??????

Security was RIGHT there, doing what they were instructed to do…nothing!

That guy met his match in Sheryl Underwood. Good for her.

All I see on the stage is a bunch of soap killers who aren’t finished killing!

These ridiculous, staged, scripted, planned “surprises” are not even funny or shocking anymore. They are designed for grabbing ratings, and generating publicity. Anyone who believes they are real is, well, a little bit challenged.

@Dylan – sadly you are probably right.

Absolutely they are staged for ratings! Taylor was a pretty big star when Kanye interrupted her speech but her popularity went through the roof after that stunt. They are both still mining the rewards from that stunt years later. Best thing that ever happened to Taylor.