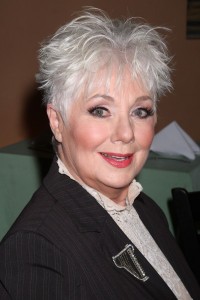 The Partridge Family mama, Shirley Jones has already taped her appearance on General Hospital, as had been previously announced.   When news circulated that Jones was making a guest stop in Port Charles, fans began speculating that Shirley would play a character perhaps in the Silas mystery storyline!

But today, according to an item from TV Guide Magazine’s Michael Logan, some new scoop has emerged at what the legendary Jones is doing on the 50-year-old soap opera!

Shirley will play the role of Mrs. McClain, “a lonely widow who sees something strange and disconcerting while visiting her husband’s grave.”  Mrs. McLain “comes across a suspicious gravedigger late one night at the cemetery and takes her suspicions to Dante Falconeri (Dominic Zamprogna) at the PCPD, thinking this might have something to do with the fugitive the police are looking for.”

So this begs the question, will Mrs. Partridge err McClain be the key to solving where on earth is Carly (Laura Wright) thanks to loony tunes Heather Webber (Robin Mattson)?   Jones appears on the February 5th episode of the ABC soap opera!

What do you think of the role Shirley is playing on GH?  Last time Jones visited the world of daytime soaps, she played Collen Brady on Days of our Lives.

Days of our Lives Draws Largest Weeklong Women 18-49 Audience In More Than 2 Years & Is Delivering Its Biggest Season In Total Viewers In 4 Years!

Heather most likely buried Carly(alive) in the same gravesite where Franco put Heather! Thought S.J. would be Ninas mother…how about Erika Slezak and Jerry ver Dorn guest staring as Nina’s parents then? (commenters be sure to get flu shot…i didnt and its horrible…one min. im fine and the next im misreable…ugh!!!)

and yes; heard about both. loved their characters…another piece of TV history (and childhood) gone…

Laura Wright must be on vacation if she’s going to be off screen for so long! Wish that meant less of Franco, but I’m afraid it means we’ll see more of him as he’s accused of her murder. I can do without the hysterical Michael screaming and yelling and accusing!

I love how RC gives us mystery writing, at times..
In an interview, RC once said;
His reading as a young man and I’d guess to date was mystery novels..
He mentioned Agatha Christie as a favorite ..
RC’s fav TV Show is Scandal ..

It somewhat shows in his writing.. in my opinion.

Nice to see Shirley Jones, however, it means that the Carly disappearing story will continue longer than hoped for. So boring. Heather is beyond ridiculous at this point.

She needs a bigger role!

YES … but does she support Hunter King? 🙂

Funny, I want MORE Francco! Love him and Carly together!

I wish she were a regular, I love her!

Great to hear Carly will be gone a while (and hopefully Franco, too). Can’t wait to see Shirley Jones and I hope this is a recurring role.

So then she’s NOT going to be “Dusty Walker’s” mom….Wonder if she will have any future scenes with Anthony Geary? Would be the second time around for them, as he once played Laurie’s beau on the PF, and as a minister, no less!!!! (Too funny….) Speaking of the show, such sad news about Dave Madden…..R.I.P. Reuben Kincaid!!!

Well we know Carly wasn’t buried and Luke just came upon Carly in the boathouse and in preview of Monday episode, she tells Luke that Heather kidnapped her.

Another bait and switch, Re-Ron does it again. next up Donna Mills. As someone else said. We can’t keep Genie or Tristan, but we get loads of OLTL on contract no less. I find myself watching less and less. I get the feeling Re-Ron is getting even with ABC for cancelling OLTL by turning it into OLTL2 Plus call it what you will, Franco is Todd even up to the make him a hero save kids and carley be a hero everyone forgets he was a serial killer, torturer. YUCK.