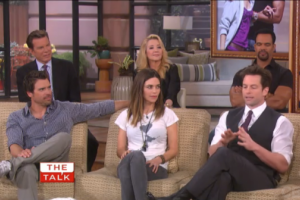 On today’s episode of  CBS Daytime’s The Talk, several members of the cast of The Young and the Restless took part in an on set celebration honoring this week’s 40th anniversary of the number one daytime drama!

After the live episode of The Talk, the cast stuck around and took part in very special web extra called, Keep Talking: The Young and the Restless, where fans in the audience could ask questions of the actors who were part of today’s tribute.

On-Air On-Soaps was in the audience, and we have to tell you, the funniest moment happened when after a sort of challenge was issued through the cast members (starting with Kristoff St. John and Joshua Morrow) …  one by one they did ten push-ups!   But then the gals got in on the action when Michelle Stafford showed her push-up power, doing ten push-ups, and then following it up with an hilarious curtsy to finish it off!  All in all, the gang from Y&R was very funny and candid!

Now after the jump, watch this segment when The Talk co-host, Sheryl Underwood moderates as the cast shares some impromptu moments that will have you laughing!  Then, let us know what was your favorite moment in Keep Talking: The Young and the Restless!

and… she gets to hold Nick and Adams’ hand.

have to put this out there….

Neil… has really grown in to his own…. he should have been included in; “the hot men of the Y&R.”.

Very dissappointed they did not have Sharon Case there. She is the face of Y&R along with all that were there but one. One was there only two yrs and in my opinion should not of been included with the rest.

I really was hoping Sharon and Adam would be together. it looked like couples from the show for the most part of at least those who were there at least 10 yrs or more. Why was Chelsea even there. This is a 40th anniversary.I don’t even consider her a Y&R cast member

I was thrilled Kristoff aka Neil mentioned Victoria Rowell aka Drucilla and everyone clapped. She needs to be allowed to come back. Fans are still out raged they the show CBS or Sony don’t listen to the fans begging for years. One question. Why was MCE Chelsea even there? She is not a real character. So many others needed to be there instead. Sharon for #1. EB aka Victor, Mrs C. Anyone but Chelsea, She is a newbie want to be.

Would of loved to see Sharon and Billy there. Not Chelsea. Give me a brake with her already!

Who knew Melody was so funny.They should use that on the show more. Love this segment, they had some of my favorites from the show. Just needed to add Billy and Chloe, Michael, and Kevin!!

What happened to Sharon Case? I could NOT believe MCE was there. She is a new person and I don;t see this character even staying!

I loved MCE on AMC and love her on Y&R, with Adam. Not a big fan of SC and the character of Sharon is ridiculous. So they call gold digging Bi-polar now? Liked the character in the beginning but she has become so sanctimonious and needy over the years. What happened to the Sharon that came to town and could stand on her own two feet without a man to tell her CONSTANTLY how wonderful she is. Sharon has got to be one of the worst mothers on daytime.

Are you crazy!!!! The ONLY GOLD DIGGER IS CHELSEA! Get your facts straight! Sharon loves with all her heart! Sharon and Adam balance each other with love and friendship. They have what it takes to go all the way as #1 till the end game!!!!

TALK ABOUT A BAD MOTHER!!!!!! CHELSEA IS A BAD MOTHER! A WOMEN WHO GIVES HER SON AWAY AND LIVES IN A MANSION UP THE ROAD. THEN LEAVES HER HUSBAND BECAUSE HE DID NOT WANT TO MOVE ACROSS THE WORLD. THAT IS A GOLD DIGGER CHILD! CHELSEA NEEDS TO GO! ADAM NEEDS THAT BABY TO RAISE WITH THE MOST LOVING MOTHER WHO IS SHARON!!!!!!!!!!!!!

I like the cast and they were fun… but I am sorry I can’t stand Sheryl and would have loved to have someone else lead the Q&A… sorry! Fun times with the cast!

Sorry Fairman, but JFP’s indulgences of Burton are awful. He is one diminesional and duller than dull.

For this we lost Tucker? and Stephen Nichols!

Well you guys made me want to turn Y&R off and so I have.

Y&R is no more. Its awful now to see the ruination of what could have been a resurgence for the Chancellor family and instead its all about duller than dull.

JFP should NOT be allowed to keep ruining soaps and you keep pretending its just great!! UGH

I loved the fact that all the actors were so natural and without any pretense. It was fun! I liked it alot.

Loved the video…………Cast members being themselves!